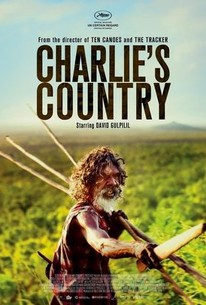 Living in a remote Aboriginal community in the northern part of Australia, Charlie (David Gulpilil) is a warrior past his prime. As the government increases its stranglehold over the community's traditional way of life, Charlie becomes lost between two cultures. His new modern life offers him a way to survive but, ultimately, it is one he has no power over. Finally fed up when his gun, his newly crafted spear, and his best friend's jeep are confiscated, Charlie heads into the wild on his own, to live the old way. However Charlie hasn't reckoned on where he might end up, nor on how much life has changed since the old days.... (C) Monument Releasing

The upright art-houser is told in English and Yolngu, with English subtitles, but the message would be clear without any dialogue: Australia is no country for old Aborigine.

Australia offers few sights as sublime as that of David Gulpilil.

A series of chapters in noble effort and misadventure alike, all captured with fluid camerawork trained on Gulpilil's every move or his long passages of mesmerizing stillness.

Using a combination of bleak realism, fatalistic humor and a healthy dose of sentimentality, Mr. de Heer traces the downward spiral of a man who has become a refugee in his own homeland.

The whole film feels not like a call to arms against Australian policies, so much as a study of life adjacent to them.

Gulpilil, as the eponymous Charlie, dreams of returning to his people and traditional way of life, setting out on a quest across the unforgiving yet ethereally beautiful bush. He's a joy to watch.

Charlie's Country is passionate, beautiful and bittersweet as it expresses a poignant tale of vulnerability, rage and sorrow.

Danielle Davenport
One Room With A View

David Gulpilil stole my heart with his performance in Charlie's Country, an Australian film that represents Indigenous culture in a way that is not told solely from a white perspective.

There are laughs here as well as moments of devastation, thankfully, and genuine joy.

Charlie's Country is a deceptively simple film, with very little action and a virtually absent soundtrack-but it's much more than that.

This is entirely Gulpilil's show, and even in the simplest, quietest moments he's riveting. It's one of the key performances in any of de Heer's films and, basically, magnificent.

"Charlie's Country" is a different kind of Australian apocalyptic movie than the ones we're used to seeing. While on a much smaller scale, the movie is no less concerned with the current state and fate of the Aboriginal population. That is embodied in Charlie(David Gulpilil, who also co-wrote with director Rolf de Heer) who once danced in front of Queen Elizabeth to celebrate the opening of the Sydney Opera House. Through a series of tragicomic misadventures in the present day, he comes to realize that the old ways are gone forever. What makes his situation even worse is that the old ways of Aboriginals were not replaced by anything. At best, they are treated like children. At worst, they are treated like criminals.