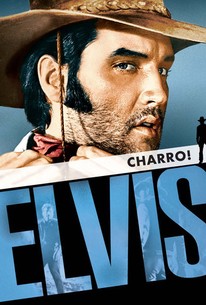 This western saga finds Jess Wade (Elvis Presley) as a reformed gunfighter who is stalked and captured by his former band of outlaws. Vince (Victor French) is the heavy who orders Jess' cheek to be branded with a hot iron. The gang terrorizes a small town by threatening to use a gold-plated and jewel-encrusted Mexican cannon on the innocent population. Presley sings only one song (the title track) in the last dramatic role of his career. The feature has the look and feel of the popular spaghetti westerns of the time. This routine western would be followed by the truly gaugeable The Trouble With Girls and Change Of Habit. Presley revived his live performing career soon after the forgettable last two films and continued touring until his death on August 16th, 1977.

James B. Sikking
as Gunner

Robert Luster
as Will Joslyn

Don't blame the King for this bleak routine western being so stiff, he tries his best, blame writer-director Charles Marquis Warren.

this American spaghetti western leaves out the sauce

A straightforward western, for a late period Elvis movie this is better than many of them, but nowhere near a good film. Still he deserves credit for trying something different even if it didn't work out too successfully.