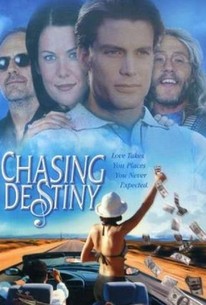 A repossession agent falls in love with a woman whose father is high on his list of priority accounts in this romantic drama. Jet James (Christopher Lloyd) was a popular and influential rock star in the late '60s, but 30 years down the road, things are not going well for him. He's in poor health and the spendthrift habits he picked up during his glory years have left him deep in debt. Jet's daughter, Jessy (Lauren Graham), is looking after her ailing Dad and trying to keep what possessions he has left from being taken away by debt collectors, particularly Jet's prized vintage Ford Mustang. Bobby Moritz (Casper Van Dien) is a silver-tongued repo man who is sent to clear up some of Jet's accounts, but his silky smooth pleas fall on deaf ears with Jessy, who is willing and able to respond in kind. While Bobby is not one to take his responsibilities lightly, he finds himself falling for Jessy, which adds an unexpected element to the tug-of-war between them. Chasing Destiny also stars two authentic classic rock stars, Roger Daltrey and Spencer Davis, as longtime friends of Jet.

Ellis Williams
as Winston
View All

There are no critic reviews yet for Chasing Destiny. Keep checking Rotten Tomatoes for updates!

I love Lauren and she can make any movie great. Kinda dumb movie besides that though.