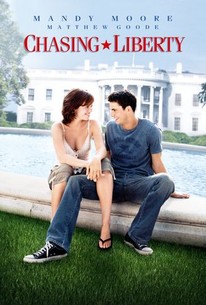 Television director Andy Cadiff turns toward feature films to direct the romantic comedy Chasing Liberty, which appears to be loosely based on the 1953 Audrey Hepburn classic Roman Holiday. Mandy Moore stars as Anna Foster, the 18-year-old daughter of President of the United States James Foster (Mark Harmon). Anna has led quite a privileged life, but she has grown to resist the constant presence of Secret Service agents getting in the way of her independence. While on a family trip to Europe, Anna manages to get away from security for a brief time. She inevitably falls into the romantic arms of British boy Ben Calder (Matthew Goode), with whom she enjoys a fresh and clean European vacation. Not wanting to ruin her fun, she doesn't tell him about her upper-class social status. But, alas, Ben surprises her with a secret identity of his own. Jeremy Piven and Annabella Sciorra play two Secret Service agents. Caroline Goodall plays the wise, conventional First Lady.

Garrick Hagon
as Secretary of State

Robert Ashe
as Chief Of Staff

Brian Caspe
as Agent In Club

Lewis Hagon
as Secretary Of State

Zac Benoir
as Chairman Of The Joint Chief Of Staff

Jeremy Healy
as Himself

Joel Sugerman
as Onlooker At The River

Dusan Fager
as Partier No. 1

Forgettable fluff but it left me in an unaccountably bad mood, mainly because it's a step back for Mandy Moore.

The thoroughly unremarkable Chasing Liberty makes it three negligible movies in a row for Mandy Moore.

It's one TV-movie romp that Kristy McNichol never got around to starring in.

Really, it's hard to really become upset with Chasing Liberty. Sure it's obvious, the story's potentially more interesting tangents all left somewhere off to the side in the unproduced good ideas handbook.

Mandy Moore is a cute girl, but she's not quite reaching the level she needs to as an actor.

What sad times we live in when a contemporary knockoff of Roman Holiday stars, in the place of the immortal Audrey Hepburn... Mandy Moore.

The attempts at humor make a viewer long for the comedy and romance of Freddy vs. Jason.

Mandy Moore's best movie so far, which, I realize, doesn't say much. The movie has its charm, but not enough to sustain its length.

Just a really sweet romantic comedy about how you can fall in love with anybody. I also just loved Weiss & Morales, and was so happy when they finally kissed. What can I say I love romance! :) Also Anna & Ben were just perfect :) I love it :) Such an amazing movie (:

The best 'president daughter' type of film that I've seen. This puts 'First Daughter' to shame. Mandy Moore and Matthew Goode make an adorable couple and I really enjoyed the whole story line despite knowing what the end would be like.

Anna Foster has no personality. All I can infer from the past hour and fifty minutes is that she whines, fishes for compliments, and all-around fails at actually taking care of herself. Still, Matthew Goode is rather luscious candy for the eyes and ears. He even gets one of those wildly romantic declarations of love with Britishisms like "adored" and "un-bloody-hinged."

"Every family has a rebel. Even the First Family." Anna Foster has never had an ordinary life. At eighteen years old, she is the most protected girl in America; she is the First Daughter...

REVIEW
One wonders if the makers of this film didn't ever find out another movie about the same subject was also being released at about the same time as this one, "First Daughter". Obviously, this is a film targeted to young girls who will, without a doubt, love it. Andy Cadiff, its director, doesn't add anything new to the formula these movies follow and the result, while not unpleasant, leaves us with a feeling we have seen it all before. The film becomes a great travelogue where Anna, the daughter of the American president escapes from Prague with a young man she has met and seems to like. They are supposed to go to Berlin, but obviously, they take the train going south and end up in Venice! Oh well, leave it to the creators of the movie to take the cute Anna all over the continent trying to find herself. Mandy Moore is a young actress that could do better. One hopes she is not typecast into these young girl she seems to play. The others in the movie do an adequate job. The film best asset the great exteriors one sees throughout the length of the movie.