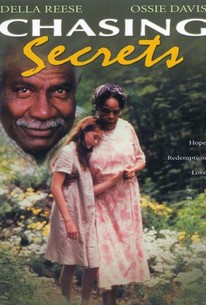 Largely told in flashback, the made-for-TV The Secret Path is the story of Jo Ann Foley (Madeline Zima), a 14-year-old girl living in squalor in a remote Southern community during WW2. Systematically abused by her illegitimate grandfather, bootlegger Hank Foley (Ron White), Jo Ann has like her mother Marie (Crystal Bernard) been forced into a life of prostitution, "servicing" the soldiers of a nearby Army base. Periodically escaping her miserable existence, Jo Ann finds comfort, security and genuine love with a poor but proud African American couple, Honey (Della Reese) and Too Tall (Ossie Davis). The film's highlight is the ultimate showdown between the fearless Honey and the bigoted, drink-sodden Hank Foley--a defining moment for everyone concerned. Based on Rose Mary Evans' novel Childhood's Thief and first telecast by CBS on April 4, 1999, The Secret Path has since been seen on cable TV under the title Chasing Secrets.

Ossie Davis
as Too Tall

There are no critic reviews yet for Chasing Secrets. Keep checking Rotten Tomatoes for updates!

There are no featured reviews for Chasing Secrets at this time.