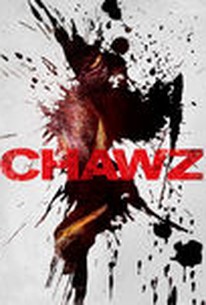 A massive, man-eating boar attacks a small Korean village in director Shin Jung-won's darkly comic monster flick. A lifelong city slicker, Seoul policeman Officer Kim (Uhm Tae-Woong) is none too happy about his recent transfer to the remote village of Sameri. Not only do the citizens of Sameri pride themselves on the fact that their quaint hamlet is entirely crime free, but they actively aim to fleece their big city counterparts by staging a sham "Weekend Organic Farming Project" as well. But just as the festivities are getting underway, a rampaging boar shows up and wrecks havoc, devouring everyone in its path. When the mayor proves unwilling to put the mountain on lockdown for fear the big event will bomb, a fearless bounty hunter shows up in search of a challenge, and hungry for ham. ~ Jason Buchanan, Rovi

Chawz is about having a good time at the movies. The humor is surprisingly strong, and I found myself laughing out loud often.

Shin Jeong-won's Chaw, the latest film to pit humans against a gigantic boar, seems more interested in wildly parodying what has come before than in rooting out new territories for itself.

6.4/10 The Korean-made "Chawz" is an appealing movie; funny, lighthearted, sometimes intense, sometimes cleverly-written, but completely unsure of what direction it wants to take. It tackles a number of different genres and takes aim; it tries to successfully play out like a B-movie, a horror film, a character drama, and most importantly of all a dark comedy. It has a sense of humor that few "monster movies" - since it thoroughly seems to be indicated that it wants to be regarded as one - have, which is admirable, but aside from a genuinely fine piece of entertainment, it's not much more. I was kind of engaged, I can't deny that I enjoyed myself, but it's the kind of mess that's nigh irredeemably silly and unfocused in equal measures. Still, I like B-movies, I like films with monsters both big and small, and Korean cinema is both intriguing and pleasurable for me, or at least it has been those things in the past. I'm not so sure what to think here; this isn't a high point for the country's cinematic offerings, but it's not bad enough to qualify as a weak entry either. It's almost likably absurd and in its best moments, mildly charming, which is enough to save it from being worthless dung. But what keeps it from being a winner is the target; which refuses to stand still, and denies the fact that it can be singular. "Chawz" is not bad, it's not good, and you'll either enjoy it or you'll want it to end after the first ten minutes. It's not quite what you'd expect, or what you'd want, but if you're familiar with the cinema of Korea, then you might find some things to like. It is, alas, the kind of satirical film that takes on the stylistics of whimsy, perhaps in larger doses than appropriate. A young police officer moves to a small, "crime-less" village; he initially feels at home with his new surroundings, since he starts with apprehending drunk drivers and doesn't appear to be going much further than that, but there's a sense that he, a simple man, does not mind his limitations. However, he's given his first real chance to shine when the silent, yet lively and welcoming village is the target of a large, mutated boar's primal rage. The giant mammal kills its fair share of people, prompting the authorities in charge to call in the "men with guns"; in the form of a top hunter and some guys he called in from a land far away. The first half builds up accordingly and rather well; we get to know some of the characters - even if there are, without a doubt, far too many to keep track of or care about - and we begin to identify with the situation at hand. There are people in the group that we like, and those we absolutely detest. The film itself seems to be trying to make a point, in some scenes, when disgustingly immoral people do disgustingly immoral things. The problem with such scenarios is that when we see these people do their said inhuman deeds, we want them to die; get eaten by that nasty bore...eaten right up. Yet most of the time, they aren't the ones who die. Bummer. Another thing; that damn piggy. "Chawz" openly advertises itself as a horror-comedy, not a straight-up horror film as I might have initially suspected and anticipated. The film doesn't let us get too good a look at the boar for most of its 120-minute running time, which gets annoying and rather tedious - bordering pretentious - when most of us came for the boar and therefore expected the boar. If it was a REAL horror film, then I would have accepted the aspirations to be suspenseful and scary, but this is not a great movie; for both its genre and its type. It wants to be quirky, unique, and outlandish; it is, but choosing to not show that big pig wasn't the right decision. I'm not sure if the filmmakers behind it knew this. All-in-all, there is some good fun to be had here. The movie is what it is; decent escapist entertainment that does a good deal of what it promises to do, and disappoints in other significantly crucial areas. It isn't a failure; it isn't even a bad movie, but the flaws were distracting at times, and therefore, I cannot say whether it's good, bad, or even mediocre. As far as decency goes, I'd say it got on my good side; but I was in a good mood, after all, so it was an enjoyable ride. You know, if you can get past the lack of depth, clear commentary and/or satire, and the clear observation that it's terribly overlong for a Korean monster movie about a giant boar that supposedly kills people. It seems to keep dragging on-and-on-and-on at parts, yet I still felt somewhat engaged. That's a bit of a blessing; but, it's not quite enough. Nothing is ever enough. And that revelation alone almost makes me want to have sympathy for "Chawz" and forgive it of its problems, but you know; that's not how criticism works. And since I often follow the common rules of film criticism, it cannot be said that the pieces come together to make this killer-boar movie an effective whole.

A lot of fun, flaws and everything. Those little piggies are really cute, the movie could do away with one particular character that adds nothing to the whole thing, but i still had fun watching this.

An interesting spoof on Jaws with the island of Amity swapped for a mountainous region of South Korea and a huge wild Boar taking the place of the great white Shark. Quite good overall but not as funny as I had hoped. It was fun to spot the references to other hollywood films, aside from Jaws, Predator is another that gets spoofed during the last half of the film. It's not until 55 minutes that we get a proper look at the killer Boar itself and it looked pretty good for a CGI'd effort and is a ferocious foe to the human hunters on its tail. There wasn't enough action for me really and some gore would have been nice.

This Korean film is familiar as Razorback meets Jaws, has a great deal of fun and horror... highly entertaining thoughout. It combines plenty of monster action and - shock horror - characterisation. Much like Joon-ho Bong's The Host, the titular beast doesn't hog the limelight. Care is taken to develop the plot. You care for the hamstrung protagonists and prey they survive. The film has some delightfully surreal moments - a hunting dog who has chats with its master; a hog vs whipper-snipper set piece; some sub-Keystone Cops slapstick; and a gory killer pig attack on a town hall when BBQ spare ribs are put on the menu.