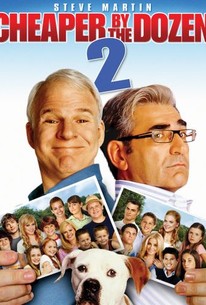 Critics Consensus: A sequel to a remake, Cheaper 2 wastes its solid cast in scenes of over-the-top, predictable humor.

Critics Consensus: A sequel to a remake, Cheaper 2 wastes its solid cast in scenes of over-the-top, predictable humor.

Critic Consensus: A sequel to a remake, Cheaper 2 wastes its solid cast in scenes of over-the-top, predictable humor.

Cheaper by the Dozen 2 Videos

Cheaper by the Dozen 2 Photos

The jumbo-sized Baker family are back in this sequel to the 2003 box-office hit Cheaper by the Dozen. College football coach Tom Baker (Steve Martin) and his wife, author Kate Baker (Bonnie Hunt), have decided its time they took their sizable brood of 12 children on a summer vacation, and so they pack up the cars and take the kids to Lake Winnetka for some camping. Not all the kids are happy about this, but the one who is really annoyed turns out to be Tom, who discovers his old rival Jimmy Murtaugh (Eugene Levy) is also staying near the lake. Jimmy and his trophy wife, Sarina (Carmen Electra), also have a large family of eight children, and Jimmy and Tom seem intent upon one-upping each other at every opportunity. As the tensions mount, the Baker family and the Murtaugh clan face off in a not-so-good-natured series of family games to determine which of the parents have the greater bragging rights. In addition to Steve Martin and Bonnie Hunt, the actors playing the 12 Baker children from the 2003 film return for Cheaper by the Dozen 2, including Hilary Duff, Piper Perabo, Tom Welling, and Kevin Schmidt.

William Copeland
as The Commodore

Enid Rose
as Announcer at Graduation

News & Interviews for Cheaper by the Dozen 2

View All Cheaper by the Dozen 2 News

Critic Reviews for Cheaper by the Dozen 2

There's a discernible lack of enthusiasm from almost everyone involved, and Duff, who's gone from wholesome to haggard in two short years, is flat-out scary.

This is definitely a family trip to stay home and skip.

There's something pernicious about a toxic mix of sitcom and snickering sex jokes getting packaged and effectively sold as wholesome fun for the family.

All I wanted to do was rent Ron Howard's Parenthood again just to remind myself that Steve Martin once made a film about families that was both honest and funny.

A couple of good chuckles can't redeem this sappy mess.

A family fantasy that plays at being happy and picture-perfect but primarily comes off as fake and dismayingly unfunny.

Cheaper by the Dozen 2 is so incredibly bland and by the numbers it's painful to watch ... it's just a collection of unfunny moments that are both uninteresting and annoying.

I was convinced I was going to hate this film. But, it didn't bug me as much as I thought it would.

I think it should be considered child abuse to inflict this tripe upon children.

A sequel every bit as bland, forced and flat as the generic 2003 comedy which spawned it.

Its heart is in the right place, but a reliance on gimmicks and sentiment undermines the story. In the end, both the laughs and the tears here come just a little too cheap.

Martin and Levy mug for their close-ups and then retire to their trailers while the stunt doubles do the really hard work.

Audience Reviews for Cheaper by the Dozen 2

As good as the first film! A must see!

Saw it again!!! Good family movie to have a few laughs and enjoy. The Baker Family begins to undergo many changes,beginning with Lorraine(Hillary Duff), and her desire to go study in New York. Their oldest daughter,Nora(Piper Perabo),is now married To Bud McNulty,and pregnant. But the couple intend to move to Houston Texas,Because of Bud's new job promotion. Feeling that the family is breaking apart,as the children grow up and move away. Tom persuades the entire family to take one last family vacation all together At Lake Winnetka. Tom's old rival Jimmy Murtaugh(Eugene Levy), and his large family are also there for the summer. Jimmy constantly flaunts his wealth and success to Tom, as well of the accomplishemnts of his children,constantly suggesting to Tom that the Baker children are less successful,because of Tom's parenting style. During the movie, Sarah Baker and Elliot Murtaugh,go on a date,where they are spied on by their fathers. In the end of the movie, the Bakers and the Murtaughs,become friends, when during a canoe race, Nora goes into labor, and the 2 families,work together to get Nora to the hospital. Nora gives birth to a baby boy,whom they name Tom.In the end,back at the lake Nora and Bud say good-bye to Nora's family,and Nora,Bud and the baby head off To Houston,Texas.

Very different from the first film. The story is more complex and the humor is more cruder. Steve Martin again delivers a funny performance and so does Eugene Levy. Bonnie Hunt as Mrs. Baker is again funny and Carmen Electra needed some help but she was okay. There are like twenty kids in the flick and maybe only half of them were good actors. The ones that did well were Hilary Duff, Alison Stoner, and Taylor Lautner. Yes, Taylor "Sexy Abs" Lautner is in this. Though not as good as the first, it still delivers zany fun for the whole family! Cheaper by the Dozen 3 is in development right now. I hope its better.

Cheaper by the Dozen 2 Quotes