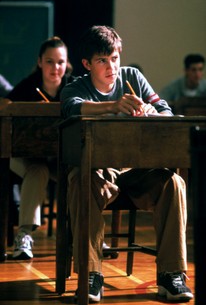 Co-director of the controversial 1998 documentary Frat House, Andrew Gurland attempts to follow in the teen-comedy footsteps of his partner on that film, Todd Phillips (Road Trip), with Cheats. The film centers on Handsome (Trevor Fehrman) and Sammy (Elden Henson), a scheming pair of best pals who cheat their ways through elementary school and junior high. Once in high school, the duo meets Victor (Matthew Lawrence) and Applebee (Martin Starr) and prove that in cheating, four heads are better than two. But when their principal catches them, they are put on probation. With that in mind, the gang must decide whether to pull off one final, grandiose cheat at the risk of being caught and having their college dreams squelched. Although intended for a theatrical release, Cheats had its premiere on Cinemax before being released on home video and DVD.

File Cheats under 'good fun if you've got nothing else to do.'

...essentially unwatchable - unlikely to appeal to anyone other than undiscriminating teenagers.