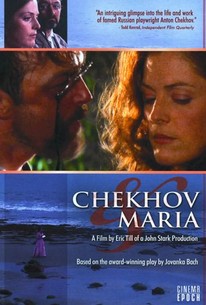 Stricken with tuberculosis as he attempts to complete his latest play The Cherry Orchard, famed Russian playwright Anton Chekhov confronts his sister Maria when she discovers that he has married Moscow Theatre actress Olga Knipper and attempts to prevent him from returning to Moscow. Chekhov is living with his sister in Yalta when he falls gravely ill. With her help, he manages to continue writing and complete his masterwork. But when Maria unearths evidence of her brother's secret marriage to the famed Russian actress, she does everything in her power to prevent him from leaving Yalta. Upon realizing just how manipulative his sister has been, Chekov prepares to confront her on the matter once and for all.

Critic Reviews for Chekhov and Maria

If it doesn't always hit its mark, it nonetheless deserves merit for presenting a very different concept with skill and maturity.

There are no featured reviews for Chekhov and Maria at this time.