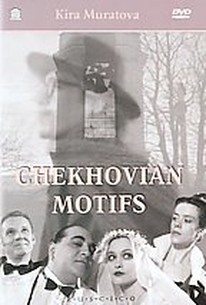 Directed by Kira Muratova, Chekhovskie Motivy (Chekhov's Motifs) is a scathing satire of various Russian cultural and literary traditions, some of which are best illustrated by the legendary Anton Chekhov. Interconnected segments take place within the farmhouse of a farcically stereotypical peasant family. Happenings include a traditional Russian Orthodox wedding and a wildly intelligent teenaged peasant's desperate plea for money from his father. This absurdist film is not limited to the works of Chekhov, though he is perhaps the most easily recognizable figure being parodied. With a controversial career spanning over 30 years, Muratova has gained a reputation as one of the most frequently banned screenwriters in the former Soviet Union.

This is a masterful absurd comedy of the highest order.

There are no featured reviews for Chekov's Motifs at this time.