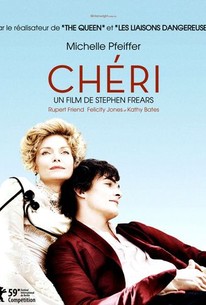 Critics Consensus: A too-short script and a romance lacking in heat detracts from an otherwise haughty charmer.

Critics Consensus: A too-short script and a romance lacking in heat detracts from an otherwise haughty charmer.

Critic Consensus: A too-short script and a romance lacking in heat detracts from an otherwise haughty charmer.

It is turn of the century in Belle Epoque Paris and a scandalous romp is underfoot. The sensational tale begins as the ravishing Lea contemplates retirement from her renowned stature as Paris' most envied seductress to the rich and famous. Her plans are cut short when she is approached by a former courtesan and arch rival, the barb-throwing gossip Charlotte Peloux, who encourages Lea to teach her disaffected 19-year-old son -- a bon vivant nicknamed "Cheri" -- a thing or two about women. The resulting escapades involve power struggles over sex, money, age and society -- and, unexpectedly, love itself -- as a boy who refuses to grow up collides with a woman who realizes she cannot stay young forever.

Jim Bywater
as Clerk
View All

Critics Consensus: Transformers 2 Is Less Than Meets The Eye

No need for elaborate sets: a walk through a rose garden or a Mucha reproduction on the wall, will suffice, especially when our primary attention is riveted by the sensuous interplay of the two leads.

Director Stephen Frears made a nice job of The Queen but this is 'King awful.

The film is a comedy of manners with a powerful undercurrent of tragedy. Cheri is funny, sad and charming, and the ending may shock you.

Sadly the few good elements of Cheri only serve to highlight the films considerable inadequacies, and the only bedroom-based action it will inspire is a comforting nap, possibly before the end of the film.

Stretching out like a cat on the wide screen, Michelle Pfeiffer shows off her durable glamour in the star role of Lea de Lonval, a high-class courtesan in pre-World War I France.

A movie like Cheri needs the time and space of The Age of Innocence. Instead, it's rushed along in an hour and 40 minutes.

The period detail is gorgeous, but all the sumptuousness on display seems to make the action ponderous, and not even the droll voice over provided, uncredited, by Frears can gee things along.

Despite its turn-of-the-20th-century setting, Chéri is a remarkably contemporary story.

Miss Pfeiffer is very thin and beautiful; Lea might be at the end of her career, but the actress who plays her certainly is not. She's wonderfully seductive.

Despite its promising pedigree, Cheri doesn't ever find its way.

Pfeiffer maintains her poise throughout. It's not her performance that limits Chéri, it's the script, which too thin to support the emotional weight it's expected to bear.

Although not really involving nor exactly compelling, this romantic drama based on Colette is at least charming, with a wonderful production design and a nice chemistry between Pfeiffer and Friend.

During la belle epoque, an old courtesan and a young man fall in love, but when the man must marry, their relationship reaches an impasse. Playwright/screenwriter Christopher Hampton collaborated with director Stephen Frears in 1988 to produce one of the most vicious battles of the genders ever put to film, Dangerous Liaisons, and their most recent collaboration seems like the aborted product of their imitators or merely the vain scribblings of old men who can no longer hack it. In every way Cheri is a Frears/Hampton film, but in every way it falls short. In what few moments of manipulation there are, we see none of the mischievousness and guile that made Valmont a man we love to hate. In what few moments of sexual passion, we none of the allure of the young Uma Thurman (all of the actresses in Cheri must have had a no nudity clause). And in what few moments of loving tenderness in Cheri, there is none of the passion we saw in Tourvel and Valmont's torrid break-up and reunion. What remains is a sterile imitation of Dangerous Liaisons. And Cheri's motivations are occasionally mysterious. Even after he explains his reunion with Edmee, it still doesn't make any sense. I must say that this is a courageous role for Michelle Pfeiffer as much of Lea's character development takes place in the sad lines on her aging face. But this was but one ugly moment in a whole film in which she is made to look as beautiful as she can. Also, the script reduces the eminently talented Kathy Bates to a mere cartoon. Overall, see Dangerous Liaisons, and when you're done, you can say that you saw Cheri too.

Indulge in a wicked game of seduction A romantic story of a young boy who is attracted by a prostitute older than him So the movie inst so bad, i thought it could have been worst, way worst, its an elegant movie, that is visually pleasing, nothing out of the ordinary. In terms of costume this movie is fabulous, amazing stylish outfits that should inspire a lot of people out there. In terms of the story, there isn't anything special, its a semi-erotic build up plot. But one thing has to be named, Pfeiffer is amazing! So is you want to go see it, its up to you. I don't recommend it to everyone, but if you like historical romances with a spice of sensuality , go ahead. Lea de Lonval : I can't criticize his character, mainly because he doesn't seem to have one!

In Cheri we have Michelle Pfeiffer giving a wonderful performance as an ageing courtisan in turn of the 20th century France (the Belle Epoque period). Unfortunately, the script and her co-lead Friend are very uneven, leaving Pfieffer and Kathy Bates on an island; a very pretty island, but an island nonetheless. The emotional impact of the story falls a bit flat, in spite of a wonderful narration by the director Frears, who provides a straight forward direction, trying to wring some sense of drama to a script that frankly has very little. A fine example of not cashing in on the emotional currency of "star crossed love" is the film'ending, where a voiceover states that Friend goes off to fight in the "war to end all wars", survives and then, faced with a life without his soul mate, puts a gun to his head. Far better, I believe, would have been a scene where he puts his army uniform aside, gazes at a picture of Pfieffer, and then puts the gun to his head... fade to black. Still, for all its failings, the film, as carried by Pfieffer, along with the wonderful scenery, sets and costumes, delivers a reasonable bit of entertainment.