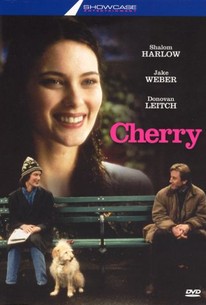 In the romantic comedy Cherry, Leila Sweet (Shalom Harlow) has begun to hear the faint rumblings of her biological clock at the age of 29. This isn't unusual in itself, but Leila's key obstacle in her dilemma about having a child is rather uncommon -- she's still a virgin. Leila was stood up at the altar ten years ago and promptly swore off men forever; since then, she graduated from Harvard and moved to New York City, where she runs a muffin shop and keeps a dog for company. Leila is now determined to have a baby but isn't willing to forgive the enemy in the process, so she begins advertising for sperm donors willing to assist in artificial insemination. However, most of the respondents remind her why she gave up on men in the first place. Circumstances soon force her to take a closer look at two of her neighbors who seem fond of her -- a professional clown named Eddie (Donovan Leitch) and a gynecologist named, we kid you not, Beverly Kirk (Jake Weber). While Leila weighs her options, Beverly meets a pair of sweet-natured street kids in dire need of a loving mother. Shalom Harlow, who played Matt Dillon's dim-witted super model girlfriend in In & Out, gives an able comic performance as the most beautiful 29-year-old virgin in New York in this film, which was screened at the 1999 Los Angeles Independent Film Festival.

Donovan Leitch
as Eddie the Clown

John Richardson Hartmann
as Man No. 1

Robert Capelli Jr.
as Man No. 2

Erik Jensen
as Man No. 3

Heath Jacob Baldwin
as Man No. 4

Mark Schulte
as Man No. 5

Jim Grollman
as Man at Window

There are no critic reviews yet for Cherry. Keep checking Rotten Tomatoes for updates!

Hilarious movie! Shalom Harlow is intriguing in this.