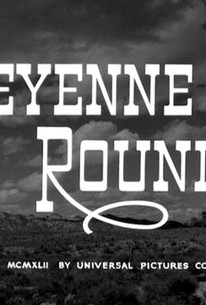 Johnny Mack Brown's Universal western series was drawing to a close when Cheyenne Roundup was released in mid-1943. Brown is herein cast in a dual role, as honest Gils Brandon and his less-than-honest brother Buck. Pursued by lawman Steve Rawlins (Tex Ritter), Buck tries to pass himself off as the upright Gils. But in the end, the good brother is forced to make the bad one pay the price for crime. Jennifer Holt, daughter of cowboy favorite Jack Holt, is the leading lady; Fuzzy Knight socks over his usual unsubtle comedy relief; and music is provided by The Jim Wakely Trio, soon to star in their own series of sagebrushers. ~ Hal Erickson, Rovi

Gil Patric
as Perkins
View All

There are no critic reviews yet for Cheyenne Roundup. Keep checking Rotten Tomatoes for updates!

There are no featured reviews for Cheyenne Roundup at this time.