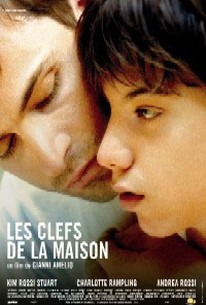 Critics Consensus: Favoring subtlety over cheap sentimentality, The Keys to the House is emotionally honest, compassionate, and a genuine tear-jerker.

Critics Consensus: Favoring subtlety over cheap sentimentality, The Keys to the House is emotionally honest, compassionate, and a genuine tear-jerker.

Critic Consensus: Favoring subtlety over cheap sentimentality, The Keys to the House is emotionally honest, compassionate, and a genuine tear-jerker.

The Keys to the House Photos

A man makes friends with his teenaged son for the first time in this emotional drama from Italy. Gianni (Kim Rossi Stuart) fathered a child with his wife, but she died in childbirth, and the baby was born with severe physical and mental handicaps. The boy, Paolo (Andrea Rossi), was raised by the late woman's family until he reached the age of 15, when Gianni decided he wanted to meet and spend time with his son. With Paolo scheduled for treatment with medical specialists in Germany, Gianni offers to pick up his son and travel with him to Berlin. At first, Gianni is taken aback by the extent of his son's disabilities, but he also sees the great warmth and charm that his son possesses, and over the course of their first few days together, Gianni begins to feel a real bond with Paolo for the first time. While in Berlin, Gianni makes friends with Nicole (Charlotte Rampling), a woman whose daughter faces many of the same challenges as Paolo, and through her he begins to appreciate the responsibilities and the rewards of caring for a handicapped child. La Chiavi di Casa (aka The Keys to the House) was screened in competition at the 2004 Venice Film Festival.

Camilla Erblich
as Woman on Tramway

Bernd Weikert
as Policeman
View All

Critic Reviews for The Keys to the House

Tackles issues like guilt, shame and compassion with admirable sensitivity.

Amelio, one of the true modern heirs of the great Italian neo-realist tradition, is a filmmaker of great subtlety, emotional precision and socio-psychological acumen.

Radiates a warm humanity and uplifts the spirit.

Amelio intelligently steers clear of lachrymose speeches, swelling orchestral music, and cheap redemption and instead probes away at the ambivalent feelings of parents towards their handicapped off-spring.

Amelio deals with the sensitive subject in a mature matter, refusing to descend into Hollywood-style schmaltz.

It takes a story that could be turned into the most florid kind of tear-jerker and instead tells it with an exactness and a restraint that makes it powerfully effective.

Tough and sensible film, whose heart is in the right place.

Takes on the challenge of overcoming the obstacles entailed in working with a handicapped actor.

Those who find this kind of material weepy are advised to give it a pass.

Amelio tells the story with a silent stillness that belies the intense emotions that churn under the surface.

Rich Cline
Shadows on the Wall
View All Critic Reviews (26)

Audience Reviews for The Keys to the House

I pulled this movie off the shelf of a rental store at random. I don't really know what compelled me to grab it, but I took it home for a little cinematic gamble. You never know - sometimes you strike gold. This time I did find a true gem. I can honestly say this is one of the best, deepest, and most profound films I have ever seen. The messages are so moving and so artfully communicated. I watched it over and over and over and showed it to my family and friends because this was a discovery that couldn't be kept a secret. It sticks in your mind and you find yourself running over the beautiful nuances of it again and again. One could write a book on everything that's not directly said in the film but lies just beneath the surface. What's more, all this artistry is somehow accomplished without resorting to any Hollywood-formula safety nets. As the film begins we are introduced to Gianni, who we later learn is about to come face to face with his tortured past. Fifteen years prior to where we come in, a much younger and less wise Gianni impregnated his young girlfriend. She dies tragically in childbirth, but the child survives, though he is severely handicapped. Gianni, no doubt, felt guilt-ridden and in despair - feelings which were only exacerbated by the anger, resentment, and blame he likely felt from the girl's family. The anguish and the guilt were too much for him and he fled, something for which we cannot really blame him, condemned to seek out atonement elsewhere in his new life, which he is determined to do the right way this time. The abandoned child is then taken in by the sister and brother-in-law of the girlfriend. Flash forward fifteen years where the doctors of Paolo (the child) think it would be beneficial for him to have his father in his life. Here we come in and watch these two struggle to be a family and make up for all those lost years. Gianni, now seeing Paolo for the very first time, feels an instant paternal bond to him. Not only is he confronting his original guilt, but it is now compounded by his fifteen year absence. The whole while he is trying to prove himself as an able caregiver, but he is constantly reminded of his inadequacy. The irony here lies in Gianni's wizard-of-oz complex. He perceives himself to be a failure when, in reality, he proves to be quite a fantastic dad. Paolo, on the other hand, has a very conflicting agenda. It is said in the course of the film that Paolo likely lacked the affection an infant needs early on. As a result he is very much in need of love as well as independence, probably due to his feeling alone during much of his formative years. The paradox, then, is that, due largely to his severe handicaps, Paolo can never be truly independent. The whole time, however, he tries to show that he can take care of himself as well as be vitally useful to everyone else. He keeps saying how he has so much to do and how busy he is and how they are needing him back home. The keys to the house, for Paolo, embody his need to be important and feel needed - not needy. As Gianni tries to take care of Paolo and Paolo tries to demonstrate his capability, we must sit back and watch the very real-life conflict play out. Charlotte Rampling's character, a mother of another handicapped girl at the hospital they go to, very appropriately tells Gianni that if he plans to be a part of Paolo's life and be close to him to expect suffering. Parenthood is certainly not easy, and their situation complicates it greatly. The film ends at a very moving crescendo that took me by surprise the first time, but as I've re-watched and contemplated it there is no other ending to be had. It is the most appropriate. It is beautifully simple and simply beautiful.

The Keys to the House Quotes