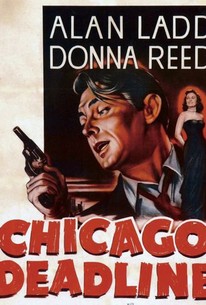 Alan Ladd headlines this crime melodrama that teeters on the brink of a classic film noir as it chronicles a reporter's almost ghoulish obsession with learning a dead woman's identity. Ladd plays a tough-as-nails Chicago reporter who shows up in a ramshackle south-side boarding house where he wants to interview a runaway and perhaps convince her to go home. He happens into the next room and there finds the tubercular corpse of a young woman. Though her body is ravaged by the disease, she is still incredibly beautiful and he feels strangely drawn to her. Beside her, he finds an address book which he takes before the police arrive. Later he begins looking up addresses in hopes of learning more about her. He soon learns that she was living under an assumed name and had questionable friends, including mobsters, a shifty financier, a bogus writer, a head-injured fighter, a hooker and a moll. As he looks deeper into her relationships with these people he finds himself getting hopelessly entangled in a deadly web of murder and blackmail until the end when he has a violent confrontation with one of the mobsters that culminates in gunplay. The reporter is seriously wounded. Still his obsession with the dead girl seems endless and he even leaves the hospital to attend her funeral. There he burns the address book and as he does, the girl's brother concedes that the reporter knew her better than anyone. While the general atmosphere of the film is appropriately grim and gritty, many felt that Ladd's reporter was not hopeless enough, and was too inwardly good-hearted to be a true noir anti-hero. Also that the story didn't play up the morbidity of his obsession with the girl coupled with a relatively happy ending helps disqualify it from the noir genre. Despite these flaws it is still a powerful, well-wrought tale.

Archie Twitchell
as Reporter
View All

The film has some good performances and some fairly exciting moments.

In a Laura type of minor film noir, director Lewis Allen fails to make his love sick hero who is mooning over a corpse into anything but a superhero figure.

There are no featured reviews for Chicago Deadline at this time.