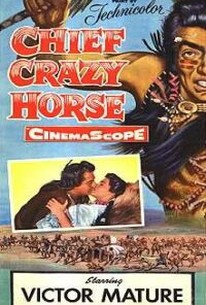 Reviled in his lifetime as a lunatic insurrectionist, Chief Crazy Horse has in recent years emerged as a Native American hero. In this off-beat western, unusual for its time in that it sympathetically presented the Native American viewpoint, Victor Mature plays the misunderstood Sioux leader while the treaty-breaking villain General Crook is played by James Millican (who had earlier portrayed an equally unsympathetic General Custer in Warpath). The battle of the Little Big Horn is staged with less bravura but more authenticity than in 1941's They Died With Their Boots On (a wildly inaccurate pro-Custer opus). Chief Crazy Horse falters only in its verbose dialogue sequences, wherein the native tongue of the Sioux seems to be Fluent Cliche.

Henry Wills
as He Dog

David Miller
as Lieutenant
View All

Even if it's competently made it still comes off as a flat presentation.

There are no featured reviews for Chief Crazy Horse at this time.