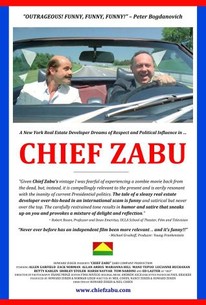 An audacious socio-political comedy revolving around a scheme to take over a newly independent South Pacific island nation while its president, Chief Henri Zabu, is in New York for a meeting at the UN; at the center of the plan is Ben Sydney, a needful and delusional New York real estate developer who dreams of having great wealth, respect, and political influence.

Steve Sashen
as Johnny the Comic

Ellie Sarty
as The Girl Singer

Ed Elkin
as The Baritone

Gordon Silva
as The Agent
View All

"Chief Zabu" may have been buried for the past three decades, but this tiresomely talky would-be satire is no treasure.

This resourceful low-budget picture could have gone deeper, but within its brief running time manages to send up materialism, groupthink, celebrity worship and political posturing.

I'm glad this movie exists and is being revisited with an updated perspective. There is a common saying: "You can't make this stuff up!" With Chief Zabu, it looks like they did, and it came true.

It took until 2016 for a newly-edited cut of "Chief Zabu" to be publicly presented. If you ever have a chance to see it, don't pass it up. Here is a rare comic artifact worth savoring.

There are no featured audience reviews yet. Click the link below to see what others say about Chief Zabu!