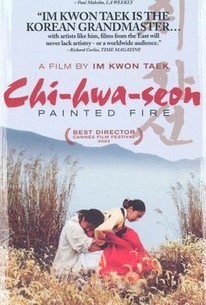 Critics Consensus: A fittingly artful biopic about the life of a brilliant painter, Chihwaseon offers an uncommonly compelling look at a singularly creative life.

Critics Consensus: A fittingly artful biopic about the life of a brilliant painter, Chihwaseon offers an uncommonly compelling look at a singularly creative life.

Critic Consensus: A fittingly artful biopic about the life of a brilliant painter, Chihwaseon offers an uncommonly compelling look at a singularly creative life.

Renowned Korean director Im Kwon-Taek (Chunhyang) tells the story of legendary iconoclastic Chosun Dynasty artist Oh-won (Choi Min-Sik). With little reliable documentation of the artist's life, the director (along with co-writer Kim Young-Oak) used dramatic license to fill in the details of the man's life. Born a peasant named Jang Seung-ub in 1843, the artist used his talents to escape a life of poverty. A wealthy nobleman, Kim Byung-Moon (Ahn Sung-Ki), recognizes Jang's talent, and takes him in at an early age. Master Kim recommends Jang to a respected art teacher, and his career path begins. As a young man, Jang grows in stature for his ability to flawlessly copy well-known Chinese paintings. He also falls in love with a noble's daughter, Mae-Hyang (You Ho-Jeong). Because of the class difference, he can never be with her, and he's heartbroken when she marries another man. This sets him on the path he follows for much of his life -- that of a drunken wanderer. Despite his self-destructive hard drinking, his penchant for consorting with prostitutes, his impoverished background, his refusal to follow anyone's rules, the political turbulence of the times in which he lives, and the fact that he rarely signs his own work, Oh-won rises to prominence as an artist. Director Im shared the Best Director prize (with Paul Thomas Anderson) at the 2002 Cannes Film Festival, and Chihwaseon was also featured in the 2002 New York Film Festival.

Tae-Woo Jung
as Jang Seung-Up as a Teenager

This South Korean film is one of the few authentic artist biopics ever created for the screen. It doesn't crudely guess at the source of the late 19th century painter Jang Seung-up's genius. It simply exhibits it.

It is quietly observant, with a detached eye for the telling moment, and the visual compositions are often exquisite.

[Chihwaseon] rushes through the life of its subject in nimble leaps and bounds, concentrating on the livelier and more spectacular parts and avoiding the dull historical and biographical stretches.

The problem is, painting isn't a spectator sport, as the interminable scenes of Jang at work continually confirm.

Another masterpiece from one of the world's more neglected great directors, a master artist who here reveals the soul of another.

A fascinating, consummately crafted and ultimately moving study of a man who conforms surprisingly closely to western archetypes of the artist as rebel and hedonist.

Im Kwon-taek's narrative approach focuses on detail, regarding both the actual story and the overall visuals, with Jeon Il-seong's cinematography matching the actual paintings of Seung-up in beauty, without neglecting realism

In spite of these few moments of wonder, and even the dense, moving thematic content, the film ultimately doesn't leave a lasting taste.

The sturdy and goateed Choi Min-sik gives an extraordinary performance as the mercurial Ohwon whose moods fluctuate from sadness to rage, anguish, and depression.

For all its beauty and artistic ambition, the film remained stubbornly remote and soulless to me.

This Korean drama is a credible portrait of its main character, the revered 19th-century artist Oh Mon Jang Seung-up, and it looks beautiful enough to be a work of art itself.

Jang Seung-Up is an artist that just can't catch a break. His talent is noticed at first, but he is soon buried beneath an ever increasing number of art students. He is eventually noticed after making a perfect copy of a more established artists painting, after having just one look. This brings about attention, which is also his downfall. He is shunned for outclassing his own teacher, and soon becomes a drunken mess. There's a lot of redemption in this film, almost anyways. Jang is a man that can only excel whilst drinking. This leads to an obviously large amount of problems. Chihwaseon is a very breautiful film, in terms of the arts it presents, and the way it presents itself. The acting is highly emotive and believable, with Choi Min-Sik, carefully balancing the dependent Jang, with touches of hostility and openness. It's only drawback is the predictable nature of the biopic. Take an individual's life, and truncate it to 2 hours, and you're bound to run into similarities with other famous people of the past.

Up until recently,a number of films dedicated to the lives and times of exceptional painters,fine artists in a broader scope started emerging out of nowhere.Ladies,gents,I present you the unanimous masterpiece of them all,forget Pollocks and Fridas,Sung-up,a humongous legend in the Joseon dynasty in Korea,a fabulous poetic journey by the hands of an elderly Im Kwon-taek and yet profoundly young,Min-sik proves he is an Actor.