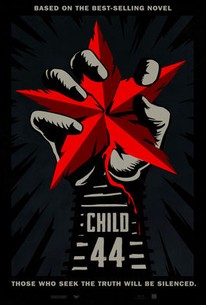 Critics Consensus: There's a gripping story at the heart of Child 44 and a solid performance from Tom Hardy in the lead, but it all still adds up to a would-be thriller that lacks sufficient thrills.

Critics Consensus: There's a gripping story at the heart of Child 44 and a solid performance from Tom Hardy in the lead, but it all still adds up to a would-be thriller that lacks sufficient thrills.

Critic Consensus: There's a gripping story at the heart of Child 44 and a solid performance from Tom Hardy in the lead, but it all still adds up to a would-be thriller that lacks sufficient thrills.

A politically-charged serial killer thriller set in 1953 Soviet Russia, CHILD 44 chronicles the crisis of conscience for secret police agent Leo Demidov [Tom Hardy], who loses status, power and home when he refuses to denounce his own wife, Raisa [Noomi Rapace], as a traitor. Exiled from Moscow to a grim provincial outpost, Leo and Raisa join forces with General Mikhail Nesterov [Gary Oldman] to track down a serial killer who preys on young boys. Their quest for justice threatens a system-wide cover-up enforced by Leo's psychopathic rival Vasili [Joel Kinnaman], who insists "There is no crime in Paradise." (C) Lionsgate

Feda Stukan
as Driver at Crime Scene
View All

In the end, the film lacks an imagination, and that unfortunately winds up dragging it through the mud.

The movie hints at a riveting story but is incapable of delivering it.

Hardy is very odd, as usual.

The story is a confusing bore that leads achingly slowly to a solution as perfunctory as it is implausible.

Given these actors and the ravishing decrepitude of the locations and costumes and the lustrous cinematography of Oliver Wood, I found it more than watchable the whole way through.

A good example of how to waste a cast with so many talented actors. [Full Review in Spanish]

Although the muddled, complicated subplots spin the film in too many directions to make Child 44 a truly successful adaptation of its source material, the allure of its leading performances are enough to make it worth a watch.

The myriad plot strands never come together to make a cohesive whole; despite the best efforts of the impressive ensemble cast.

It's sad to see such talent going to waste, not to mention what could have been a compelling and arresting tale, the result, however, is a flat, dreary and messy drama.

... an anachronistic and failed proposal; worse: it sounds false and feels false. [Full review in Spanish]

It's not often that a movie is constructed in such an incoherent fashion that even the title merely hearkens back to an after-thought from the film, but "Child 44" is one such uncommonly haphazard film. The fact that Child #44 is indistinguishable in the film proves the utter lack of focus in the horrendously uneven, improbable and at times preposterous script. Of course, one might not feel sure that Child #44 isn't a central figure since the dialog is nearly impossible to hear through the actors' constantly mumbled Russian accents. Although the acting is good and there are some admirable points to the directing, "Child 44" does not come close to the coherence of virtually the same story filmed in 1995 as "Citizen X" with Stephen Rea and Donald Sutherland. At least in that older film, there was some sense of scale and suspense -- in "Child 44", one hardly realizes it matters that there is a serial killer on the loose. Especially since everyone else is worse than the serial killer. In sum, this film is boring and stupid. One cannot use an all-knowing, omnipotent, Russian security service as a constant plot device (who in the 1950s apparently have Star Trek teleporters to move characters from one end of the Soviet Union to the other within moments!), only to play off its utter cluelessness when it comes to matters of crime and security. The script and editing are just too silly to get my recommendation.

First off Tom Hardy is top notch in this film, possibly one of my favorite recent performances of his, he sells his character "Leo Demidov's" inner struggle and conflicting emotions excellently, nailing the Russian accent as well. Apart from Hardy, Naomi Rapace also does a great job at conveying her own personal struggle. There is also a few smartly put together scenes in this film a few early on and for the first 30 minutes I was very intrigued by the plot and mystery of the horrific child murders. Also the dull gloomy cinematography sets the tone for the narrative well. However this film did fail to deliver on many levels. The plot lost its real intrigue after about 30 minutes, and for a murder, mystery set in this era their was no clear build up of suspense, or a real pay off for the slow paced plot. I thought Joel Kinnaman's antagonist was poor, he didn't show much range and his character was very clichéd, the no mercy, militant, coward. Also I felt the action sequences were very poorly filmed with too much shaky cam, I honestly couldn't see what was happening. It's sad that this story lost its momentum after the first act because it really did have a lot of promise. I feel that this film's $50,000,000 budget could have been put in a better director's hands. Maybe David Fincher or Denis Villeneuve who did Prisoners and Enemy. Overall I am generally disappointed with Child 44 but I can take nothing away from Tom Hardy who shines throughout.

It wouldn't be hard to forgive this messy thriller for its expository dialogue and for being too long and confusing about its purpose, but it is impossible to overlook the way it insults our intelligence with a ridiculous, one-dimensional villain and laughable plot absurdities.

Unfairly cast out like some unwanted vermin, Child 44 is a police procedural based on a best-selling novel that the studio simply wanted to get rid of quietly. It was "dumped" into theaters and, as expected, began its disappearing act. That's a shame, because it's actually a rather involving mystery and an especially fascinating perspective into a little known world of being a cop on the other side of the Iron Curtain. Tom Hardy plays Leo, a member of the Soviet state police who is tracking a serial murderer preying upon orphaned children across the countryside in 1953. His wife (Noomi Rapace) is terrified of him and secretly a rebel informer. The two of them get banished to a Soviet outpost when Leo refuses to turn her in; he also refuses to accept the state's conclusion over the dead children. In a weirdly perplexing turn, the Soviet Union believed murder was a Western byproduct. "There is no murder in paradise," we are told several times, and since the U.S.S.R. is a communist worker's "paradise," whatever reality that doesn't jibe with the party line is swept away. The murder mystery itself is fairly well developed and suspenseful, but it's really the glimpse into this bleak and paranoid world that I found so intriguing. Child 44 is a slowly paced film thick with the details of establishing the dour existence of Soviet Union life. You truly get a sense of how wearying and beaten down these people's lives were, how trapped they felt, how justifiable their paranoia was. The husband and wife relationship grows as they're forced to reevaluate their sense of one another, and it genuinely becomes a meaty dramatic addition. Child 44 is a slow movie but the pacing serves the deliberate and oppressive tone of the film. It's a film with some problems and missteps (certain antagonists make little sense in their motivations), including some incoherent action/fight scenes (fighting in the mud? Way to visually obscure everybody, guys). However, this is a better movie than the studio, and a majority of critics, would have you believe. It's engrossing and taut and ambiguous and consistently interesting, with another standout performance by Hardy. Like many of the characters, this movie deserved a better fate. Nate's Grade: B