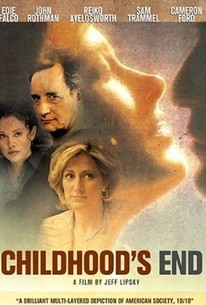 In this bittersweet, romantic coming-of-age comedy/drama, a long-time friendship between three recent high-school graduates is severely strained when one of them has an affair with another's mother. Cocky Greg impetuously attempts to fulfill a long-time fantasy by seducing his friend Denise's mother, causing serious trouble when he succeeds.

Laura Ekstrand
as Partygoer
View All

There are no critic reviews yet for Childhood's End. Keep checking Rotten Tomatoes for updates!

There are no featured reviews for Childhood's End at this time.