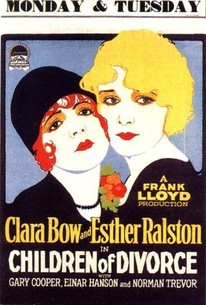 At the insistence of silent screen star Clara Bow, up-and-coming Gary Cooper was cast in a prominent role in Bow's 1927 vehicle Children of Divorce. Bow, Cooper. and Esther Ralston play three wealthy, spoiled young products of broken homes. Though Cooper and Bow are deeply in love, they are hesitant about making a committment, remembering the pain of their parents' divorce. Both lose out on true happiness when Cooper is tricked into marriage by the calculating Ralston; on the rebound, Bow marries a man she does not love, who is unfaithful to her. It takes several torturous plot convolutions before a happy ending can be reached. Gary Cooper looks uncomfortable in the role of a vaccilating weakling, but his genuine off-screen affection for Clara Bow comes through loud and clear (and never mind that this is a silent picture).

Tom Ricketts
as The Secretary

Critic Reviews for Children of Divorce

There are no featured reviews for Children of Divorce at this time.