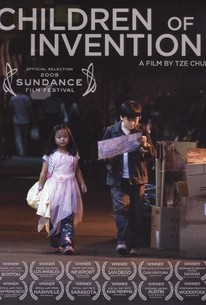 One of Filmmaker Magazine's "25 New Faces of Independent Film," writer-director Tze Chun makes his feature film debut with one of the most-awarded and best-reviewed films of the year. CHILDREN OF INVENTION is by turns humorous and heartbreaking, an "edge-of-your-seat family drama" (Spout) that's both "powerfully moving and rigorously intelligent."(Boston Phoenix).After being evicted, hardworking single mom Elaine Cheng (Cindy Cheung, Lady in the Water) tries to maintain a normal life for her children, Raymond and Tina. Elaine juggles a number of jobs, including working for a questionable pyramid scheme. When Elaine doesn't return home one night, nobody knows the kids are home alone, and they are left to fend for themselves. As the days pass, Raymond, a budding inventor, realizes he needs to come up with a plan to take care of his little sister.Referencing both the mortgage meltdown and suburban Ponzi schemes, "the film finds delicate moments of beauty and grace as its child heroes are forced to make their way" (Filmmaker Magazine). Featuring "gifted child actors--off-the-charts cute, refreshingly free of Hollywood precociousness" (LA Weekly), CHILDREN OF INVENTION is "as close to cinematic purity as one is likely to see this year" (Film Society of Lincoln Center), a timely drama about the influence of the adult world on children and resilience in hard times.CHILDREN OF INVENTION made its world premiere at the 2009 Sundance Film Festival and won Grand Jury Prizes for Best Narrative Feature at the 2009 Newport International Film Festival, Independent Film Festival Boston, and Los Angeles Asian Pacific Film Festival, and Special Jury Prizes at the 2009 Sarasota, Nashville, Los Angeles Asian Pacific, and San Francisco International Asian American Film Festivals. It was the Opening Night Film at five film festivals and the Closing Night Film at two film festivals in 2009. -- (C) Official Site

Stephen Gevedon
as Rob the Salesman

News & Interviews for Children Of Invention

View All Children Of Invention News

Critic Reviews for Children Of Invention

An independent film that's all about forced independence.

Shows enormous love and respect for those clutching at the short end of the American Dream.

Restraint proves a virtue of -- and a shrewd if necessary choice for -- Children of Invention, a modestly scaled, quietly effective independent movie about a struggling single mother and her two children.

Performances are realistic and unpretentious, and the backbone of this observant movie by a director-writer with a promising future.

Heartfelt but dramatically tepid tale of two kids who must fend for themselves after their single mom goes missing.

It's a promising start for director Tze Chun, but despite the film's charms, the story doesn't get interesting enough early enough.

Preserving a sense of hope for today's children, there is too much in this film that is too hard to believe.

keeps the danger and sadness at bay, instead giving us two fairly developed kid characters

A more than welcome addition, in a film world where mothers more often than not, get a bad rap for everything that ails US society when it comes to shortchanging children.

Children of Invention seems furiously scribbled in shorthand, undermining what it has to offer in contemporary resonance.

The young director Tze Chun is not a flashy filmmaker, but he understands the vulnerability of immigrant workers in the sleazy sub-rosa economies of a floundering 21st-century America.

Audience Reviews for Children Of Invention

I've said it before, and I'll say it again...I am a sucker for movies revolving around children. This one is no exception. I enjoyed this movie, mostly because of Crystal Chiu. What an adorable little girl! She has such an expressive face, and did an outstanding job in this film. The whole movie was interesting, and the ending was appropriate, I thought. Nice little movie.

I liked this a lot - the kids were adorable and very believable and you could really feel the mother's struggle. Definitely worth watching.