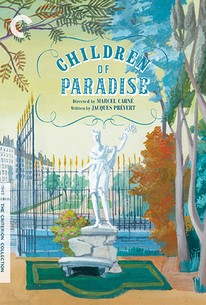 Critics Consensus: Strong performances abound, and Carne's wit and grace are evident in this masterful (if long) French epic.

Critics Consensus: Strong performances abound, and Carne's wit and grace are evident in this masterful (if long) French epic.

Critic Consensus: Strong performances abound, and Carne's wit and grace are evident in this masterful (if long) French epic.

Even in 1945, Marcel CarnÃ (C)'s Children of Paradise was regarded as an old-fashioned film. Set in the Parisian theatrical world of the 1840s, Jacques PrÃ (C)vert's screenplay concerns four men in love with the mysterious Garance (Arletty). Each loves Garance in his own fashion, but only the intentions of sensitive mime-actor Deburau (Jean-Louis Barrault) are entirely honorable; as a result, it is he who suffers most, hurdling one obstacle after another in pursuit of an evidently unattainable goal. In the stylized fashion of 19th-century French drama, many grand passions are spent during the film's totally absorbing 195 minutes. The film was produced under overwhelmingly difficult circumstances during the Nazi occupation of France, and many of the participants/creators were members of the Maquis, so the movie's existence itself is somewhat miraculous. Children of Paradise has gone on to become one of the great romantic classics of international cinema. ~ Hal Erickson, Rovi

Raphaël Patorni
as Another Dandy

To luxuriate in the film's 3-hour, 10-minute length is to experience this masterpiece as it hasn't been experienced since the day it opened.

Shot in 1943 during World War II, Children of Paradise overcame so many seemingly impossible obstacles that today the film seems enchanted.

If you give this movie time to work on you, the elements that seem overly artificial or impossibly distant from our own time fade into insignificance, and you're left with a complicated and wonderful romantic drama that's full of surprises.

Before French cinema reinvented itself with jump cuts and cool bobs, Marcel Carné's 19th-century backstage drama was the epitome of good taste: a sumptuous spread of genteel sparring and epic heartache.

Marcel Carné's towering intimate epic of early 19th-century love and the lives of performers, often heralded as the greatest French film of all time.

Poetry with a capital "P," sprinkled with fairy dust.

'Children of Paradise' is a complete fresco from a time in the Gallic country, in which beat mixed feelings, eternal passions, and above all, the joy of those children in the title beat. [Full Review in Spanish]

If acting and directing awards were given but once in a century, Carne, Barrault and Brasseur would still be nominees.

Don't skip this one if you can. I saw it in Paris and it remains one of the most memorable pictures I've seen.

Prevert's script is simply a miracle... The photography is dramatic yet harmonious, the sound-track is subtle. Like the deacon's wonderful one-hoss shay, it is all of a piece and every piece of it is of the best workmanship.

A classic, a museum piece to the young, and to others inextricably linked with a particular time and atmosphere, barnacled with too many memories to be objectively assessed.

This tragic romance is about the love of art and theater as much as human love. Forget that it is three hours long; every moment bursts with love and passion...

It's easy to see why Marcel Carné's "Children of Paradise" is considered by many to be an all-time great of the medium. It's a sprawling, lavish production that was made under extraordinary circumstances (during the Nazi occupation of Franch). But in the year 2011 (and in the humble opinion of this reviewer) the film does feel a tad dated from a narrative standpoint. That said, the film is effortlessly likeable and entertaining, and even at over three hours never drags or feels like a chore. Though it doesn't hold up in the same way that say... "Notorious" or "It's a Wonderful Life" does, it's still an outstanding achievement that should be considered mandatory viewing.

a miracle film made under nazi occupation. a tragic romantic epic of all the mad denizens of the boulevard du crime. wonderful

1945 French satire, if you like Moulin Rouge, or La Haine check this one out.

A french masterpiece. Under the circumstances it is amazing such a film was even made. The luxurious set pieces and the beautiful costume design bring this film to life. Humour, tears, and dramatics are all added. Like all the great French stories it tells us of love and loss.