Children on Their Birthdays2002

Children on Their Birthdays (2002) 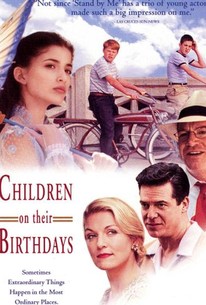 Children on Their Birthdays Photos

A boy in the deep South learns the joys and sorrows of first love in this comedy-drama based on the short story by Truman Capote. Billy Bob Murphy (Joe Pichler) is a thirteen-year-old boy growing up in a small Alabama town in 1947. Billy Bob's mother Elinore (Sheryl Lee) lost her husband during World War II, and has been struggling to raise her son on her own. Billy Bob's best friend is Preacher Star (Jesse Plemons); Preacher has a pronounced mischievous streak, which is hardly tempered by the fact his Dad has a drinking problem and his older brothers are teenage thugs in training. When thirteen-year-old Lily Jane Bobbitt (Tania Raymonde) moved into town with her mother, a strange woman who never speaks, both Billy Bob and Preacher are entranced; groomed to act like a "lady" and convinced she's destined for stardom in the movies, Lily Jane isn't like any of the girls in town. But Billy Bob not only has Preacher as a rival for Lily Jane's affections, his best friend's coarse personality makes her wonder if Billy Bob is the sort of young gentleman who is worthy of her company. Lily Jane also earns the enmity of many of her schoolmates when she befriends Sister Rosalba, a girl her age from the town's African-American neighborhood. As Billy Bob struggles with first love, he also has to deal with his mother's budding romance with Speedy, the local auto mechanic (Christopher McDonald. Children On Their Birthdays was the first film directed by Mark Medoff, a noted screenwriter and playwright who received an Oscar nomination for his work on the film Children Of A Lesser God.

Critic Reviews for Children on Their Birthdays

The movie version is like a bedtime story -- pleasant but a little soporific.

A slice-of-life picture where the life is uneventful and the slice missed all the good chunks.

Audience Reviews for Children on Their Birthdays

There are no featured audience reviews yet. Click the link below to see what others say about Children on Their Birthdays!

Children on Their Birthdays Quotes