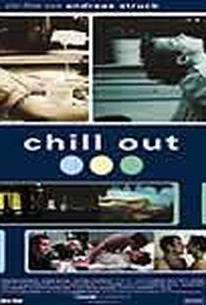 A woman must compete with her friend for the love of a man -- it's not an unusual story, but this drama from Germany puts a new spin on the situation. Anna (Tatjana Blacher) is a woman in her early 30s who has a normal appetite for sex, but can't stand the idea of involvement or attachment. Consequently, her love life consists of a long series of one night stands with anonymous pick-ups. Anna becomes friendly with Johann (Sebastian Blomberg), a gay burglar who has had one too many run-ins with the law and wants to get out of the racket. Anna invites Johann to stay at her apartment, and they enjoy a close but platonic relationship. One night, Anna meets Max (Barnaby Metschurat) at a club and is immediately attracted to him. However, unlike the other men she's been with, Anna finds to her surprise that she wants to see Max again. Max moves in with Anna, but she soon finds that she has a rival for Max's affections -- Johann. Chill Out was shown in the "Panorama" series at the 2000 Berlin Film Festival. ~ Mark Deming, Rovi

Critic Reviews for Chill Out

There are no critic reviews yet for Chill Out. Keep checking Rotten Tomatoes for updates!

There are no featured reviews for Chill Out at this time.