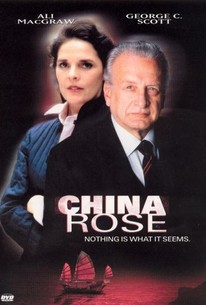 Filmed in Hong Kong, the made-for-TV China Rose stars George C. Scott as an American businessman. Scott arrives in Canton, China, trying to find out what has happened to his rebellious son, who was swept up in China's "cultural revolution". Ali MacGraw plays a freewheeling guide who falls in love with Scott while helping him locate his son. Together, Scott and MacGraw uncover what was described in the original ads as a "shocking secret". The long-in-tooth stars are not ideally suited to their roles in China Rose, but that's only one of the many problems plaguing this murky melodrama.

There are no critic reviews yet for China Rose. Keep checking Rotten Tomatoes for updates!

There are no featured audience reviews yet. Click the link below to see what others say about China Rose!