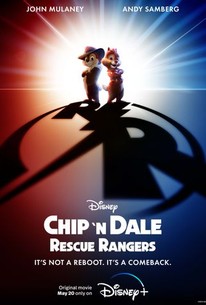 In "Chip 'n Dale: Rescue Rangers," Chip and Dale are living amongst cartoons and humans in modern-day Los Angeles, but their lives are quite different now. It has been decades since their successful television series was canceled, and Chip (voice of John Mulaney) has succumbed to a life of suburban domesticity as an insurance salesman. Dale (voice of Andy Sandberg), meanwhile, has had CGI surgery and works the nostalgia convention circuit, desperate to relive his glory days. When a former cast mate mysteriously disappears, Chip and Dale must repair their broken friendship and take on their Rescue Rangers detective personas once again to save their friend's life.

There are no critic reviews yet for Chip 'n' Dale: Rescue Rangers. Keep checking Rotten Tomatoes for updates!

There are no featured reviews for Chip 'n' Dale: Rescue Rangers at this time.