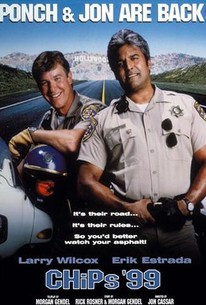 "CHiPs" is an acronym for the California Highway Patrol. This TV movie brings back Ponch (Erik Estrada) and Jon (Larry Wilcox) from the 1977 NBC police-drama series. Clearly meant as a tongue-in-cheek, self-mocking homage to the original series, the telepic features plenty of flashback CHiPs clips and cameos by Johnnie Cochran, Garry Marshall, Judge Judy, and Stephen J. Cannell. Jon is now a captain, while widower Ponch works out of a small precinct. They reteam to track a woman running a carjacking ring. Past series regulars seen here include Robert Pine, Brodie Greer, Paul Linke, and Bruce Penhall. Filmed in Southern California, this movie premiered October 27, 1998 on TNT.

Judge Judy Sheindlin
as Herself

Johnnie L. Cochran Jr.
as Himself

There are no critic reviews yet for CHiPs '99. Keep checking Rotten Tomatoes for updates!

There are no featured reviews for CHiPs '99 at this time.