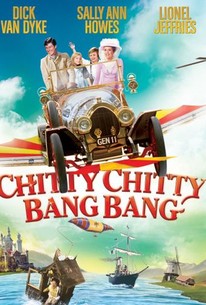 This $10 million production is taken from the only children's novel done by master spy author Ian Fleming. Caractacus Potts (Dick Van Dyke) is an eccentric inventor, widower and family man who invents a magical car that can float and fly in addition to the usual road travel. The evil Baron Bombast (Gert Frobe) tries to steal the car and the inventor, but he grabs Potts' eccentric father (Lionel Jeffries) by mistake. Soon the family and candy heir Totally Scrumptious (Sally Ann Howes) are off to rescue grandpa, who still believes he is in the British Army fighting in India. They fly to a fantasy land where all children are jailed, and the adults must rescue the children to insure a safe family reunion. British comedy legend Benny Hill plays the role of the Toymaker. Eleven songs are presented by Robert and Richard Sherman, who provided the memorable music for another Van Dyke film, Mary Poppins.

Peter Arne
as Captain of the Guard

Ken Adam's sets are inventive, but the special effects are shoddy, the songs instantly forgettable, and the leisurely length an exquisite torture.

A fast, dense, friendly children's musical, with something of the joys of singing together on a team bus on the way to a game.

Chitty Chitty Bang Bang contains about the best two-hour children's movie you could hope for, with a marvelous magical auto and lots of adventure and a nutty old grandpa and a mean Baron and some funny dances and a couple of [scary] moments.

The film is too long at well over two hours, but the effects are impressive for the time and the musical numbers zippy.

Ken Hughes directs in the resolutely bright over- exclamatory tones of someone working hard to make the party go.

A too cutesy musical.

A fantastical car story custom made for kids.

Ask yourself, would you rather show your kids Chitty Chitty Bang Bang or Marmaduke? I don't want to live in a world where the answer is the latter. [Blu-ray]

ultimately all in good fun, although it's hard to shake entirely the sense that something is slightly askew, which is probably the point

I'm old enough to have seen Chitty Chitty Bang Bang during its original theatrical run, and I've just about recovered.

Chitty Chitty Bang Bang was made in Britain for American consumption, but its magic works on kids and adults of any nationality.

Despite the fact it is excruciatingly long and the songs were so bad that it drags the film down. Chitty Chitty Bang Bang is a mostly entertaining family film. I'd call it a minor classic in the fantasy genre.Also, I found that the children stars were more annoying than charming and that the magical feeling promised didn't come of as the film makers probably planned. But its colourful and its mostly fun. For mainstream audiences i'd say its entertaining but easily forgettable but for all you oldie fans you'll adore this.

A childhood favourite and a Classic Musical with an adventurous journey. From the whacky inventions to the dreamlike journey, it's a film filled with familiar songs to all with some memorable dance scenes.