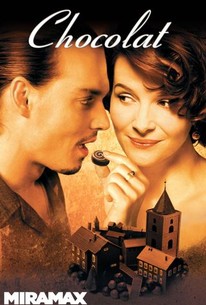 Critics Consensus: Chocolat is a charmingly light-hearted fable with a lovely performance by Binoche.

Critics Consensus: Chocolat is a charmingly light-hearted fable with a lovely performance by Binoche.

Critic Consensus: Chocolat is a charmingly light-hearted fable with a lovely performance by Binoche.

The most tempting of all sweets becomes the key weapon in a battle of sensual pleasure versus disciplined self-denial in this comedy. In 1959, a mysterious woman named Vianne (Juliette Binoche) moves with her young daughter into a small French village, where much of the community's activities are dominated by the local Catholic church. A few days after settling into town, Vianne opens up a confectionery shop across the street from the house of worship -- shortly after the beginning of Lent. While the townspeople are supposed to be abstaining from worldly pleasures, Vianne tempts them with unusual and delicious chocolate creations, using her expert touch to create just the right candy to break down each customer's resistance. With every passing day, more and more of Vianne's neighbors are succumbing to her sinfully delicious treats, but the Comte de Reynaud (Alfred Molina), the town's mayor, is not the least bit amused; he is eager to see Vianne run out of town before she leads the town into a deeper level of temptation. Vianne, however, is not to be swayed, and with the help of another new arrival in town, a handsome Irish Gypsy named Roux (Johnny Depp), she plans a "Grand Festival of Chocolate," to be held on Easter Sunday. Based on the novel by Joanne Harris, Chocolat features a distinguished supporting cast, including Judi Dench, Lena Olin, Carrie-Anne Moss, Peter Stormare, Hugh O'Conor, and Leslie Caron. ~ Mark Deming, Rovi

Tatyana Yassukovich
as Storyteller
View All

The moral argument may be pat and predictable, but the movie disarms you with its charm and its solid craftsmanship...However familiar, the taste is still sweet, the texture light as a souffle, the sentiments pleasantly high caloric.

Chocolat is like being force-fed chocolate for two hours.

Fabulous French fairy tale and romance for teens and up.

Ultimately, especially coming from director Lasse Hallstrom, such a slight flick doubles as a fat disappointment.

If you can't be bothered running a nice warm bath, see this instead.

It takes the radical stance that people should indulge their pleasures, unless they're really mean, in which case they should eat some chocolate and learn to be nice.

A mythic fable about tolerance and love with the bitter-swet flavor of a candy that's not entirely fresh but still digestible.

Most movies that criticize religion argue for the abolition of institutions. Chocolat suggests the problem lies in how people manipulate religion to get what they want.

I've not had a film make me crave chockies so much since Willy Wonka.

Whether or not viewers end up licking their fingers to pick up the scraps ... depends on their tolerance for a different type of sugary sin: syrup.

A fairy-tale that obviously doesn't qualify as my favorite. You don't need no Vianne to tell that. Kids, among others, might find this Chocolat tasty.

An international all star cast help concoct this pleasing little truffle about walking the thin line between sin and pleasure, magic and reality.

I thought this was gonna be a dumb romance, but this movie was really good. The true great thing is the music, the score was perfect if you ask me. I think they could've made the town brighter and more colorful if you get what im saying. The acting was great, and deserved more recognition. The plot was well done and fun. This was a very good movie, and I wish you see it.

Brilliant movie, brilliant cast, and brilliant story blends with a tempting taste from all the chocolates into a great movie named 'Chocolat'... Juliette Binoche delivers a great performance as Vianne who try to keep her mother's secret recipes by travelling with her daughter from place to place until she arrives in a small and unfriendly French village for her... The other cast did a great job too, Lena Olin, Alfred Molina, Johnny Depp, Carrie-Anne Moss, and Judi Dench, and they're all deserved at least a nominee... But unfortunately only Judi Dench who got it because yes she is hard to resist... Overall it's a really tempting movie about chocolates, wrapped with a great story and great music too...