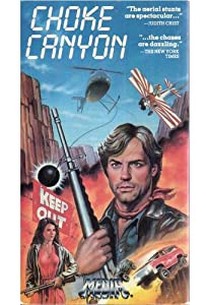 Director and former stunt coordinator Chuck Bail takes the help for this fast-paced action thriller about a Harvard-graduate physicist whose efforts to create a safe source of energy are thwarted by nuclear waste-dumping baddies. David Lowell (Stephen Collins) has discovered the secret to clean energy, and he's ready to share his gift with the world. In just a few days, Hayley's Comet will pass over the Grand Canyon, and David will capture the energy from the high-frequency sound waves emitted from the enormous space rock. Unfortunately, there are those who would rather continue to profit from conventional forms of energy, and they're not afraid to use force to get their way.

Jill Freeman
as Woman in Crowd

John Fountain
as Man in Crowd

There are no critic reviews yet for Choke Canyon. Keep checking Rotten Tomatoes for updates!

There are no featured audience reviews yet. Click the link below to see what others say about Choke Canyon!