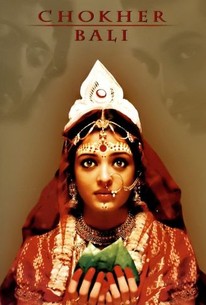 Bengali filmmaker Rituparno Ghosh directs the costume melodrama Chokher Bali: A Passion Play, based on the 1902 novel by Rabindranath Tagore. Set in the early 1900s, the film draws parallels between the British colonization of Bengal and the domestic situation of a Calcutta household. Hindi-speaking movie star Aishawarya Rai plays the lead role of Binodini, a young widow who arrives at the home of Westernized patriarch Mahendra (Prosenjit Chatterjee). While working as a caretaker for his mother Rajlakshmi (Lily Chakraborty), she becomes close personal friends with his wife Ashalata (Raima Sen). Eventually, Binodini's duplicitous actions shake up the entire household. Rai and Sen's voices have been dubbed into Bengali. Chokher Bali was nominated for the Golden Leopard at the 2003 Locarno International Film Festival.

Serene and pictorial, Chokher Bali becomes convincing as a social critique by taking a genuine interest in the minutiae of family life and the interaction between erotics and politics.