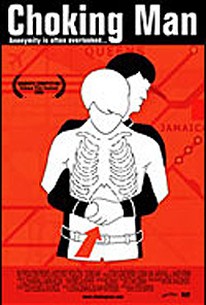 Critics Consensus: Quirky animated interludes fail to lift this dull US immigrant indie out of its introverted torpid state.

Critics Consensus: Quirky animated interludes fail to lift this dull US immigrant indie out of its introverted torpid state.

Critic Consensus: Quirky animated interludes fail to lift this dull US immigrant indie out of its introverted torpid state.

At the Olympic Diner, Jorge, the dishwasher, is choking on the American dream. Jorge is caught between his Ecuadorian roots, his new American life working at the diner for Rick and his own crippling shyness. When the diner adds a bright new member to the staff, Jorge's world gets a little more complicated as his affections grow for the new waitress, a beautiful Chinese girl named Amy.

For all its concern with social and mental disintegration, Choking Man is a strangely tender film.

Despite efforts to impart a little tension and human interest, the tale is told with such discretion, it's almost anonymous.

There's a low-key New York drama lurking somewhere, but Barron can't seem to decide if he's making that or something more flashy.

The creepy and original power of the film is the schizophrenic other who taunts him when he finally crawls home to his maggoty bedsit. Weird.

Some US indie films are so torpid, so pointless and so incredibly whingey that you want to reach into the screen and slap the face of everyone involved. This film, by writer-director Steve Barron, is one such.

The film marries digicam naturalism to animated fantasy to oddsome but fascinating effect, rendering magical the inner world of the shy and almost muted Jorge. It's an unusual but valuable addition to the cinema of contemporary migration.

There's enough charm and enterprise here to win over viewers who have the patience to stick by the tongue-tied Jorge. An intriguing change of direction for pop-video pioneer Barron, though next time he might like to cut loose that bit more.

It's all a bit anonymous despite engaging performances, especially from Yuan as the sunny optimist, but the character of Jorge is so cripplingly introverted that there's nothing to latch on to.

Steve Barron's darkly melancholic, low-budget drama is worlds away from the blockbuster swagger of his earlier Teenage Mutant Ninja Turtles.

They don't add up to much; and he's just too passive to make us care even slightly about whether he gets the girl or ends up taking a meat-cleaver to his rival.

After more than an hour in Jorge's relentlessly miserable company the voice in The Sneak's head was saying "leave now".

The patiently-paced film is meant to draw us into the small community of people who work at a diner, and "touching moments" where these characters connect, are more the style than any kind of a "thriller" theme. In any case, overall it's a high quality film and well worth seeing if you get the chance, but you won't be missing much if you don't.