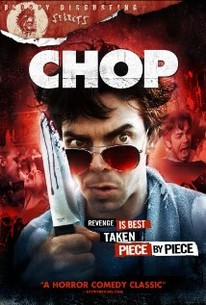 Lance Reed, a seemingly innocent man, is forced by a psychotic stranger to confront his duplicitous past. The mysterious stranger, seeking retribution for a past crime, forces Lance to reveal his inner most secrets by systematically removing his limbs! As time runs out and Lance's limb count dwindles, he must recall what he's done to the stranger before he doesn't have a head to remember with. Jam-packed with laughs, gore and some insane twists, CHOP is the directorial debut of DEADGIRL screenwriter Trent Haaga.

At its best moments it seems to be channeling something co-written by Neil Simon and Eli Roth.

There are no featured audience reviews yet. Click the link below to see what others say about Chop!