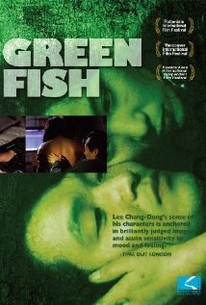 In this South Korean crime drama, Makdong (Han Suk-Kyu) is discharged from the army to find changes in his rural hometown village. Aboard a train, he meets nightclub singer Miae (Shim Hye-Jin), girlfriend of a Seoul gang leader (Moon Sung-Keun). Makdong joins the gang, but his increasing interest in Miae puts him in conflict with the boss. This film won the 1997 Vancouver Film Festival's Dragons and Tigers Award, given to top Asian films. ~ Bhob Stewart, Rovi

"Green Fish" is a great film, as it uses the crime thriller as its base to present a character drama with social implications in magnificent fashion.

Chang-dong extracts a sterling performance from Suk-Kyu and finds plenty of depth in the film's more contemplative moments, but the gangland segments never quite attain the same ring of truth.

The director of the amazing Oasis first showed his remarkable talents with this brilliant piece of gangster cinema. Once again Chang-dong deals with a complex relationship which is anything but 2-D. His use of long takes are remarkable as he still moves the camera around fluently and gracefully giving these long takes more motion and pace than still shots. A few very clever techniques such as the use of mirrors, cancelling out the necessity for shot/reverse shot cutting really highlight the skills on display here. The acting is phenomenol and is never too in your face or too subtle. The original music is a wonderfully gentle piece and any film that uses a Tom Waits song to great effect is bound to get high marks by me.