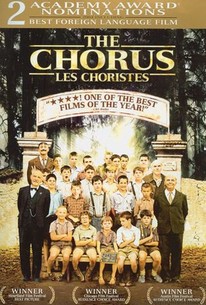 Critics Consensus: While predictable, this low-key heartwarmer manages to be uplifting without overdoing the sentiment.

Critics Consensus: While predictable, this low-key heartwarmer manages to be uplifting without overdoing the sentiment.

Critic Consensus: While predictable, this low-key heartwarmer manages to be uplifting without overdoing the sentiment.

It never aims higher than a sweet sort of middling. And it succeeds.

Even though all the notes are predictable, the film hits them with wit, warmth and gusto.

There's very little in The Chorus you haven't seen before, but the movie's depth of sentiment -- especially its profound humanism -- makes it worth experiencing again.

Ultimately effective on its own unambitious terms, but it's not the freshest thing to come down the pike.

Rises above feelgood status by virtue of its credible acting and outstanding score.

We smile and maybe even weep on cue, but we're still kept at a distance looking in, peering through a pretty window.

It is a simple, familiar story brought to life uniquely and touchingly.

Boarding school antics and the power of music.

So infused with nostalgia, optimism and authenticity, it will prove irresistible to the older art-house demographic.

Les Choristes isn't quite as forced and syrupy as Mr. Holland's Opus or Music of the Heart, but it's not a classic like To Sir with Love or Goodbye, Mr. Chips either.

The Chorus resonates through the brie.

It is very easy to feel enchanted by the beautiful songs and the accessible, formulaic narrative, but the problem is that this film is in fact a silly fantasy that could hardly take place in real life, with a predictable plot and all those clichés found in movies about inspirational teachers.

Touching and moving film about the profound impact youth and hope can have on the roadweary willing to take chances and accept the hands dealt...and vice versa. Really worth seeing for anyone who was inspired by a teacher in their youth or who thinks thay may have inspired others.

Beautiful movie! Sweet. Heart warming. Charming. The actual chorus of young children they used for this movie sang like angels. This little film gives me hope that if children are engaged in the arts in some form, it becomes possible for them to overcome, or at least survive, the damage of earlier years of neglect.

The Chorus is a charming story of hope infused with so much optimism and nostalgia. Genuine, heartwarming, and greatly inspiring. A humble, beautiful ballad to celebrate innocence and beauty. A joyful watch. Resonating.