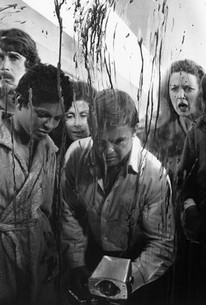 This speculative horror film details the tribulations endured by a specially-selected test group of 11 people who are informed that they will be the only occupants of a nuclear fallout shelter built half a mile below the Earth's surface. Chosen by project coordinator Peter Macomber (Bradford Dillman) as a fair cross-section of humanity, the group includes a politician, a businessman, an athlete and an author. As it turns out, the "survivors" are unwitting participants in one of those contrived psychological experiments featured so often on programs like The Twilight Zone. To make matters worse, someone's left a vent open, releasing thousands of ravenous vampire bats. Produced in Mexico, this tepid psycho-thriller plays out like the aforementioned TV drama, albeit padded out to 100 minutes. Said padding seems comprised of equal parts dull dialogue and interminable battles with the winged foes -- which are admittedly quite realistic and make for some genuine creep-out scenes.

There are no critic reviews yet for Chosen Survivors. Keep checking Rotten Tomatoes for updates!

Another Film from the Midnite Movie Double Feature Collection. This is a film that deals with what would happen if the world was under a nuclear holocaust, something that was still on the minds of everyone during the cold war. A group of people are taken from different walks f life and put in an underground bunker to repopulate the earth when it is safe to return to the surface, but in reality there has been no nuclear war its just a study to see how people would react, but what was expected was blood sucking bats in the bunker. A drive in movie for sure, might have scared a few people in 1974 / 1975 time frame but does little these days in the wake of other horror movies. But if you enjoy good ole Drive In Movies this is for you. And Jackie Cooper (from Little Rascals all grown up) is in this movie. 3 1/2 stars