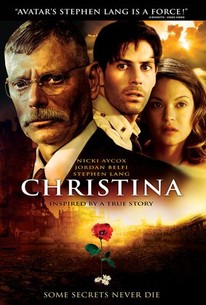 A young German woman finds her attempt to start a new life in the United States thwarted by an uncompromising police detective immediately following World War II. Berlin: 1945. Christina Vogel (Nicki Aycox) has just gotten engaged to Billy Calvert (Jordan Belfi) -- an American GI and correspondent for the Stars and Stripes newspaper -- but continually skirts around an important detail about her past. Just as Christina and Billy are preparing to depart for the U.S., Police Inspector Edgar Reinhardt (Stephen Lang) appears at the door. When Inspector Reinhardt reveals the awful truth about Christina, her dark past casts a grim shadow over her happy future. ~ Jason Buchanan, Rovi

There are no critic reviews yet for Christina. Keep checking Rotten Tomatoes for updates!

There are no featured reviews for Christina at this time.