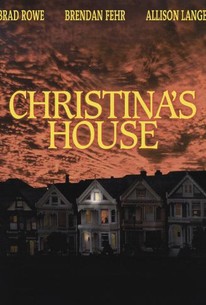 Not everyone likes houseguests, especially when they're uninvited (and serial killers to boot), as in this horror story. Christina Tarling (Allison Lange) is a teenage girl who lives with her unstable father James (John Savage) and her younger brother Bobby (Lorne Stewart) in the family's new home. While Christina is trying to sort out her feelings for both Eddie (Brendan Fehr), her boyfriend, and Howie (Brad Rowe), a handyman she's become infatuated with, she soon discovers she has bigger fish to fry: there is a stranger in the house who begins leaving messages and gifts for Christina -- and who isn't averse to the idea of killing people in order to make an impression.

Has a fun concept, but is a stinker of a horror film.

Scream and yell all you want, honey. This movie's a loser.

There are no featured audience reviews yet. Click the link below to see what others say about Christina's House!