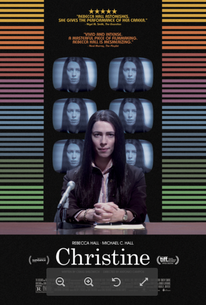 Rebecca Hall stars in director Antonio Campos' third feature film, CHRISTINE, the story of a woman who finds herself caught in the crosshairs of a spiraling personal life and career crisis. Christine, always the smartest person in the room at her local Sarasota, Florida news station, feels like she is destined for bigger things and is relentless in her pursuit of an on-air position in a larger market. As an aspiring newswoman with an eye for nuance and an interest in social justice, she finds herself constantly butting heads with her boss (Tracy Letts ), who pushes for juicier stories that will drive up ratings. Plagued by self-doubt and a tumultuous home life, Christine's diminishing hope begins to rise when an on-air co-worker (Michael C. Hall) initiates a friendship which ultimately becomes yet another unrequited love. Disillusioned as her world continues to close in on her, Christine takes a dark and surprising turn. Based on true events, Campos' intimate and sensitive portrait of a woman on the brink is grounded by Hall's impeccable and transformative performance as Christine. Rounding out the supporting cast are superlative performances by Michael C. Hall ("Dexter"), Tracy Letts ("Homeland," Pulitzer Prize-winning playwright), Maria Dizzia ("Orange Is The New Black"), Timothy Simons ("Veep") and J. Smith-Cameron (MARGARET). Directed by Antonio Campos ("Simon Killer," "AfterSchool"). Written by Craig Shilowich. Produced by Shilowich & Melody C. Roscher ("The WonderClub"). Executive Produced by Sean Durkin & Josh Mond (Borderline Films) and Robert Halmi Jr. & Jim Reeve (Great Point Media).

Campos' film is a clinging, yearning look at one woman's mad desire for acceptance.

It's a haunting reflection on the hopefulness of feminism for the 1970s working woman, which is also uncomfortably effective. And while Christine's death is a part of the conclusion of the narrative, it doesn't define it.

Impeccably played by Rebecca Hall, this is a thoughtful reflection on life's casual cruelties and how little attitudes towards women have changed since Watergate.

It's certainly the stronger of the two films that tackle Chubbuck's strange, sorry story.

A compelling drama that is simultaneously respectful and provocative.

Hall's movie through and through. She owns the role from first frame to last.

Hall's a marvel of precisely off-center movements, piling up inexplicable but fascinating tics that kept making me lean in closer to see.

Christine may ultimately be known as a performance film, and that's both slightly disappointing and absolutely deserved.

The key to the uncertainty that Christine the movie and Christine the character produce is Rebecca Hall's excellent work -- one of her best performances. [Full Review in Spanish]

Christine captures the period and the mood of the country quite faithfully, without getting lost in '70s kitch. But nothing about the film quite prepared me for the depth of the compassion and pain that Rebecca Hall brings to her role.

The movie's biggest asset is a powerhouse performance by Rebecca Hall, who builds a sympathetic character without betraying the integrity of the person who inspired it.

Standout performance by Rebecca Hall, but unfortunately the fill-in-the-blanks scenes (relationship with mother, love interest in co-worker, etc.) mostly came off like Lifetime. I also didn't like that Christine's decline was laid largely at the feet of her inability to have children--perhaps that was truly the largest factor in the real person's struggle, but it's a trope that's overused and feels rather reductive to see in film again and again. Also--and I don't know how you'd avoid this--the tension in the film can't be sustained if you know anything about it. The ending was shown in the trailer, and to get audiences interested at all I do understand why it would have to be. An imperfect yet ambitious film with just a little more in the positive column than the negative, which again is largely thanks to Hall.

Very effective true story about a socially awkward young woman who commits suicide on live air. I didn't know of her before watching this, but I really found this sympathetic and nicely done.