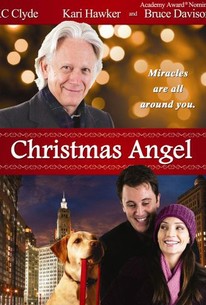 Disheartened at her inability to find a job and deeply embittered at the onset of the Christmas season, a single woman agrees to help her benevolent neighbor in a clandestine goodwill mission. Ashley (Kari Hawker) is desperate for employment when her neighbor Nick makes her an offer she can't refuse: assist him in helping strangers anonymously and earn a steady income for her efforts. Describing himself as a kind of wealthy Secret Santa, Nick gets satisfaction from helping others, but treasures his privacy. When Ashley meets magazine writer Will, the two form an immediate connection. But as a writer Will is always digging for facts, and in time Ashley entrusts him with Nick's secret. When that secret gets out, Will realizes that his actions have consequences, and attempts to work with Ashley to set things right.

K.C. Clyde
as Will Price

There are no critic reviews yet for Christmas Angel. Keep checking Rotten Tomatoes for updates!

This would've been better with a different lead actress - she was terrible! However, I enjoyed the premise of the story.