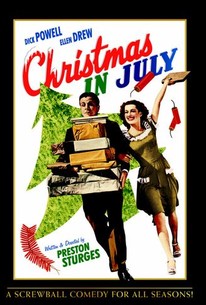 This modest Preston Sturges comedy stars Dick Powell as an office clerk dreaming of better things and Ellen Drew as his more pragmatic girlfriend. Powell convinces himself that his fortune will be made if he can win a slogan contest sponsored by a coffee company. Powell's contribution: "If you can't sleep at night, it isn't the coffee, it's the bunk!" Three of Powell's fellow workers decide to have some fun with him; they fake a telegram which announces that he's won the contest. The deception snowballs to the point that even the head of the coffee firm (Raymond Walburn) labors under the misapprehension that Powell has won. When the painful truth is revealed, Powell finds himself broke (because of all the creature comforts he's bought) and jobless, but at least he's retained the love of his wife. A cute deus ex machina to the story appears in the person of William Demarest, the foreman of the "jury" that is judging the slogan contest.

Pat West
as Man with Telephone
View All

Critic Reviews for Christmas in July

Produced for a paltry $325,000, it once again gives the lie to the arbitrary Hollywood assumption that a film's quality is in direct proportion to its cost.

A mildly diverting programmer, Christmas in July lacks both the overall spontaneity and entertainment impress of Sturges' first picture.

As a creator of rich and human comedy Mr. Sturges is closing fast on the heels of Frank Capra.

Preston Sturges's second feature as writer-director (1940, 66 min.) is in many ways the most underrated of his movies -- a riotous comedy-satire about capitalism that bites so deep it hurts.

A breeze to watch, and Sturges packs the brief running time with plenty of his trademark wit, skewering corporate vanity and overconfident male bluster in equal measure.

A delightful effort worth watching on Christmas Day, Independence Day, and even Arbor Day.

It's a small gem, almost too short to mention (67 minutes), but glitteringly perfect nonetheless.

A wonderful present that's perfect for anytime of the year.

Tragically underseen, this Preston Sturges comedy is all of 68 minutes long (including the credits) and is a freakin' laugh riot from start to finish.

Audience Reviews for Christmas in July

This is a good movie. It's funny and sometimes sad too. The cast is good, and the story is nice. I enjoyed it.

Cute Preston Sturges, not his best but enjoyable.

"If you can't sleep - it isn't the coffee, it's the bunk!" A cruel practical joke gets out of hand when a lowly employee of a coffee company is duped into believing he has won $25,000 in a competition to invent a new corporate slogan. Nothing else in the film can quite match the hilarious and touching opening rooftop scene - in which Dick Powell's Jimmy tries to explain the law of averages and his dismal slogan to his bemused girlfriend (Ellen Drew) - though Christmas in July still manages to be a fairly delightful piece of minor Sturges. If the ironic ending can be seen from several miles away, Powell and Drew make such a charming double act it hardly matters.

68 minutes! This is like a Frank Capra meets the Ramones. OK it's not quite that good, but it's good.