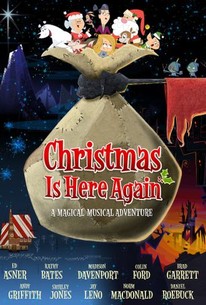 A young orphan and her loyal group of friends band together in order to prevent Christmas from being destroyed by a nefarious grinch named Krad in this holiday-themed animated adventure narrated by Jay Leno. Santa's toy bag has been stolen, and if it isn't recovered soon the world's children will forget about Christmas entirely. When a spirited orphan discovers that an elusive villain named Krad is to blame for the crisis, she rounds up all over her pals in hopes of tracking him down and recovering Santa's sack before it's too late. Featuring the voices of Ed Asner, Andy Griffith, Kathy Bates, and Shirley Jones.

Jay Leno
as Narrator, the Narrator

Colin Ford
as Dart
View All

Christmas Is Here Again is a wonderful film with lessons about compassion, giving, loyalty and never giving up hope.

There are no featured audience reviews yet. Click the link below to see what others say about Christmas Is Here Again!