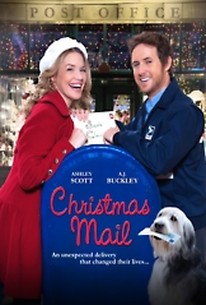 A postman falls for the pretty co-worker he was recruited to spy on, only to realize that she may be the woman of his dreams in this romantic holiday comedy. When Matt's boss grows suspicious of new hire Kristi, a "Santa Writer" whose job is responding to letters addressed to the North Pole, she recruits him to spy on her and report back with any unusual findings. But the more time Matt spends observing Kristi, the harder he starts to fall for her until he's hopelessly in love. Later, when Kristi uncovers the clandestine plot, she quits her job and disappears without a trace. Meanwhile, Matt searches high and low for her, to no avail. But when Kristi learns that Matt had no choice if he wanted to keep his job, it's only a matter of time before fate brings them back together.

Paris Tanaka
as Mom
View All

There are no critic reviews yet for Christmas Mail. Keep checking Rotten Tomatoes for updates!

There are no featured audience reviews yet. Click the link below to see what others say about Christmas Mail!