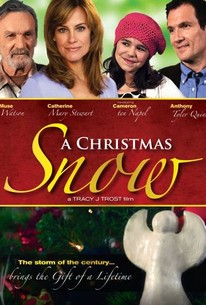 A woman unable to separate the joys of the Christmas season from the pain of her family past gets snowed in with two people who help her to realize what it takes to find true happiness. Thirty years ago, Kathleen's father left the house on Christmas Eve, and never came back. Ever since that day, Kathleen (Catherine Mary Stewart) has blamed her mother for breaking up the family. In Kathleen's eyes, Christmas is just another reminder of everything that's ever gone wrong in her life - so she refuses to celebrate. But just when it seems that Kathleen's bitterness has become her defining characteristic, a chance encounter with kindhearted stranger Sam (Muse Watson) finds her chilly demeanor starting to thaw. Inviting Sam into her house to escape the incoming ice storm, Kathleen gradually opens up to the stranger while at the same time striving to establish a bond with her fianceé's precocious daughter Lucy (Cameron ten Naple). The chill in the air slowly subsiding, Katherine realizes that the time has finally come to let go of her painful past instead of allowing it to define her. ~ Jason Buchanan, Rovi

There are no critic reviews yet for Christmas Snow. Keep checking Rotten Tomatoes for updates!

There are no featured audience reviews yet. Click the link below to see what others say about Christmas Snow!