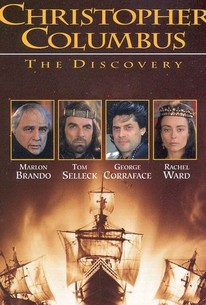 Critics Consensus: Ironically, for a biopic about a voyage many associate with people accepting that the world is round, Christopher Columbus: The Discovery falls completely flat.

Critics Consensus: Ironically, for a biopic about a voyage many associate with people accepting that the world is round, Christopher Columbus: The Discovery falls completely flat.

Critic Consensus: Ironically, for a biopic about a voyage many associate with people accepting that the world is round, Christopher Columbus: The Discovery falls completely flat.

John Glen directed this throwback to the costume dramas of the 1930s and 1940s, but without a smidgen of their energy and verve. George Corraface plays Christopher Columbus as a dynamic and muscular comic-book hero. He has a dream to set sail to find a new passageway to India, but he needs the backing of the Spanish government to do it. First, he must undergo a grilling by Tomas de Torquemada (Marlon Brando in, hands down, his worst performance). After passing muster with Torquemada, he gets the blessing of Queen Isabella (Rachel Ward) and King Ferdinand (Tom Selleck). Columbus then sets sail in a series of picture-postcard travelogue shots as he sails the ocean blue and discovers a new world of wonders -- particularly the Indian chief's well-endowed daughter. As a sop to revisionists, a rat is seen scampering down the plank as Columbus' vessel lands on "undiscovered" turf.

Serge Malik
as Alcalde of Malaga

Ivan De Bono
as Sailor in Tavern
View All

Released in 1,492 theaters on Friday, Christopher Columbus: The Discovery should be gone from most of them faster than you can hoist the mainsails and shiver your timbers.

Cast in the title role is George Corraface, whose credits include Not Without My Daughter and Impromptu. Does he overact? Let's just say that I think I heard him frown.

The film benefits greatly from the use of three totally authentic ship replicas, but the real thing -- as presented in the PBS series about Columbus -- is still much more inspiring.

George Corraface would look more comfortable in a Calvin Klein underwear ad than at the helm of a ship.

Christopher Columbus: The Discovery lacks even the misplaced energy of a camp folly. It's limp and exhausted -- a bloodless swashbuckler.

Dry as an outdated textbook, scintillating as the droning of your worst schoolteacher, Christopher Columbus: The Discovery is a colossal disaster.

This daft biographical epic reveals that the Europeans came West in search of many things: a new trade route to India and China; new souls to be converted to Christianity; new sources of gold; and new girlfriends with larger breasts.

Most of the picture is so hilariously Hollywooden that nobody could mistake it for real history.

All right, maybe the world isn't flat. But this listless historical epic sure is.

This is not so much a milestone to mark the 500th anniversary of the discovery of America as a millstone round the neck of nearly everyone connected with it.

Seeming to last somewhat longer than Columbus's original journey across the Atlantic, this dull and unintentionally funny turkey is best left to chronic insomniacs.

There are no featured audience reviews yet. Click the link below to see what others say about Christopher Columbus: The Discovery!