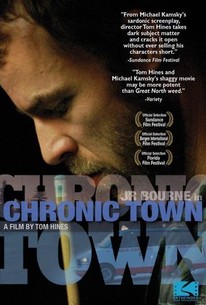 In Fairbanks, Alaska, Truman Korovin drives a cab he calls Bessie for a dispatcher he calls Blowjob. His sarcasm, witty barbs, and the odd drink or five get him through the cold winter days. Showing less than resounding support for his girlfriend's writing career, Truman gets dumped. As habit dictates, he consoles himself with some substance abuse, but after a bad acid trip and what appears to be a suicide attempt, Truman winds up in an institution and, worse, group therapy. However, in befriending his fellow "loonies," particularly a stripper, Eleanor, and an elderly woman, Elizabeth, whom he visits in a home as part of his "loony release program," Truman opens the door to a new world, puts his best foot forward, and steps into the cold.

From Michael Kamsky's smart, sardonic screenplay, first-time director Tom Hines musters exactly the kind of askew sensibility and broad-mindedness that takes seemingly dark subject matter and cracks it open without ever selling his characters short. JR Bourne takes a character generally mired in a depressive funk and buries it behind a smart-ass demeanor. These characters are people trying to deal with their messy lives, but the film has an honest acceptance of those limitations. These aren't problems with solutions-the best Truman can hope for is a better way of coping. --© Sundance Film Festival

Garry Marshall
as The Doctor

Lin Shaye
as Nurse
View All

There are no featured reviews for Chronic Town at this time.