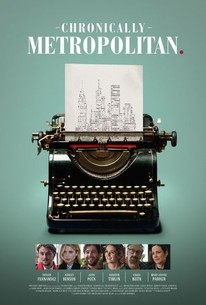 A young writer from New York City (Shiloh Fernandez) returns home and tries to reconnect with his estranged ex-girlfriend (Ashley Benson), only to discover that she's engaged to someone else. To make matters worse, she still hasn't forgiven him for writing a short story based on her parents' failed marriage. Meanwhile, his parents (Chris Noth and Mary-Louise Parker) are facing problems of their own. Xavier Manrique directed this comedy-drama, which co-stars Addison Timlin and Josh Peck.

Rhys Coiro
as The Georgian

Víctor Cruz
as Irving
View All

Resembling a Philip Roth novel that the author had the good sense to leave unpublished, Chronically Metropolitan leaves no cliché unturned in its depiction of the social and romantic travails of a group of Upper East Side New Yorkers.

Several times in "Chronically Metropolitan," a man stares at a screen as nothing happens. You'll know just how he feels.

Schutt's puckish script largely skims the surface of its too-familiar characters' navel-gazing plights, rarely sweeping us into their privileged universe.

The best way to watch is to think of it as a parody of a particularly pretentious brand of indie romance. Unfortunately, director Xavier Manrique and writer Nicholas Schutt play it so solemnly straight that it seems unlikely they're aiming for satire.

There's little to cheer in this self-serious family drama that includes such predictable shenanigans as adultery, divorce, and trying to stop a wedding.

Chronically Metropolitan is a coming-of-age dramedy but it doesn't come without some cynicism.

Chronically Metropolitan is a quirky romantic indie about life in New York City; though not perfect, it's reasonably enjoyable.

Generally, I enjoyed this film quite a bit. I don't have a lot of issues with this one aside from Addison Timlin's less than stellar acting and her character's useless part in the story.

Doesn't come together, but I'm not sure if it ever had the chance to, passing on family interplay and bitter reunions to play simplistically with profound emotions.

There are no featured reviews for Chronically Metropolitan at this time.