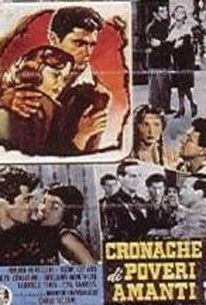 Cronaca di Poveri Amani (Chronicle of Poor Lovers) was based on the novel of the same name by Vasco Pratolini. The scene is the Vico de Corno, a well-populated alleyway in the low-rent district of Florence. Set in the 1920s, the film recalls the tinderbox political climate of the era. The eponymous "poor lovers" include Milena (Antonella Lualdi), whose husband dies at the hands of the fascists; cynical prostitute Elisa (Cosetta Greco); and lonely but comparatively well-off invalid Gesuina (Anna Maria Ferrero). Marcello Mastrioanni also appears, though the emphasis is clearly on the women of the piece. ~ Hal Erickson, Rovi

There are no critic reviews yet for Chronicle of Poor Lovers (Cronache di poveri amanti). Keep checking Rotten Tomatoes for updates!

There are no featured reviews for Chronicle of Poor Lovers (Cronache di poveri amanti) at this time.