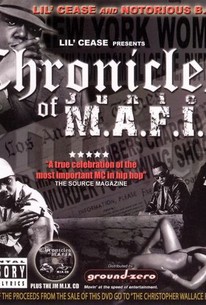 What really happened on the fateful night of March 9, 1997 -- the night one of the rap world's most promising stars came plummeting down to earth in a hail of lead and gunsmoke? To this day, there remains many unanswered questions regarding what events unfolded in the hours that led up to the violent shooting, and what role the "Junior M.A.F.I.A." and the East Coast/West Coast rivalry played in both this tragic event and the much-publicized death of rap legend Tupac Shakur. Now viewers can find out exactly how the M.A.F.I.A. is carrying on the legacy of its fallen star through interviews with those who new Biggie Smalls best.

Lil' Cease
as Himself

Lil' Kim
as Herself

Notorious B.I.G.
as Himself

There are no critic reviews yet for Chronicles of Junior M.A.F.I.A.. Keep checking Rotten Tomatoes for updates!

There are no featured reviews for Chronicles of Junior M.A.F.I.A. at this time.